The global hard seltzer market was valued at USD 3,544.6 million in 2019 and is projected to reach USD 14,482.0 million by 2027, expanding at a CAGR of 19.2% during the forecast period. In terms of volume, the market is projected to expand at a CAGR of 18.4% during the forecast period. Hard seltzer is a carbonated alcoholic drink that is fermented with sugar. It has low-calories (than other alcoholic beverages) and carbohydrates. Alcohol used in high seltzer can be just fermented cane sugar with added fruit flavors or flavored malt. Hard seltzers are significantly used in developed countries including the US, Japan, and the UK. Moreover, increasing demand for low alcohol content, low carbohydrates beverages, and low calories beverages in developing countries is fueling the hard seltzer market in Asia Pacific, and Latin America and Middle East & Africa (LAMEA). Hard seltzer is a gluten free beverage; therefore, its demand among health-conscious consumers and those with allergies or celiac disease is rising.

Increasing internet penetration in countries across the world has significantly increased the number of people using social media websites and applications. Thus, key players are engaged in advertising their hard seltzers through social media platforms including Instagram, Facebook, and Twitter. Moreover, partnerships between key players and online stores are helping them promote their products online through various platforms. Furthermore, increasing Internet penetration is also increasing product awareness, which is estimated to boost the sales of hard seltzer during the forecast period.

Rising trend of consuming beverages with low alcoholic content by young consumers due to changing consumer choices, rising health concern, and peer influence among consumers are expected to propel the growth of global hard seltzer market. Significant increase in the sales and demand for low alcohol beverages is attributed to the availability of hard seltzer drinks in various tastes, less carbonation, and low calories content. These drinks are preferred by health-conscious consumers, which in turn, drives the growth of the market. For instance, in 2020, Kopparberg, a Sweden-based manufacturer launched a range of hard seltzer drinks in the U.K., in new flavors, packaging and design, based on iridescent graphic bubbles.

Innovations in the packaging of hard seltzers is expected to create opportunities for key players in the market in the near future. Key players in the market are engaged in offering innovative cans for hard seltzers to attract consumers. The development of new innovative flavors in tart and fruity flavors, use of new ingredients and sugars, and the introduction of new fermenting processes by various companies are creating opportunities in the market. Hard seltzers is preferred due to the less sweetness and calories, which has increased its demand among consumers.

However, presence of alternative products and strict government regulations for alcoholic beverages in multiple countries across the world is expected to hinder the market growth. For instance, alcohol prohibition laws, ban on shipping of alcohol beverages, and restriction on their advertisements and promotional activities in some of the countries, including India (some states including Gujarat, Mizoram, and Nagaland), the UAE (Sharjah, Iran, and Kuwait), Iran, Saudi and Arabia, are challenging the growth of the hard seltzers market.

In terms of ABV content, the hard seltzers market is categorized as 1.0-4.9%, 5.0-6.9%, and above 6.9%. The 5.0-6.9% ABV content segment holds a significant share of the market due to its high preference among consumers. Increase in shift of consumer preference from alcoholic beverages such as whiskey, beer, and wine to hard seltzer with more than 5% of ABV drives segment growth. Furthermore, hard seltzer with 5% ABV is considered as standard proportion of ingredients, which is majorly produced by the manufactures. The 1.0-4.9% segment is estimated grow at a significant pace during forecast period. Consumer demographic which favors low alcoholic drinks significantly supports the growth of this segment. 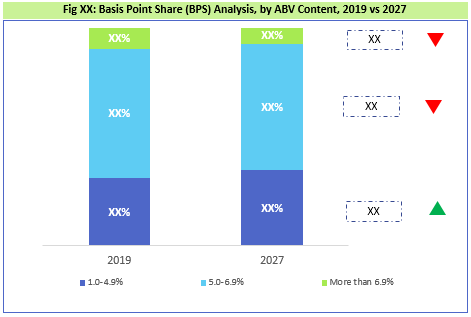 In terms of distribution channels, the hard seltzers market is bifurcated as off-trade and on-trade. The on-trade segment is anticipated to expand at a significant CAGR during the forecast period due to partnership between manufacturers and restaurants, bars, and other on-trade channels. Moreover, increasing consumer preference for drinking hard seltzers at on-trade shops is expected to drive the market growth. Off-trade distribution channel holds a significant share of the global hard seltzers market. Ease of availability, and retail stores expansion supports the significant share of the off-trade segment in the market. Companies are focused on marketing campaigns and product promotion through wine stores to increasing consumer awareness about hard seltzers. 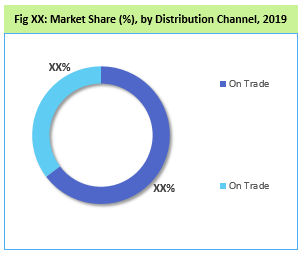 In terms of regions, the global hard seltzers market is fragmented into North America, Europe, Asia Pacific, and LAMEA. North America accounted for a significant market share in 2019 due to high product awareness among consumers. Moreover, new product launches played a vital role in the growth of hard seltzer market across North America. For instance, in May 2020, Sudwerk Brewing Co., launched a product called Life Is Hard Seltzer. 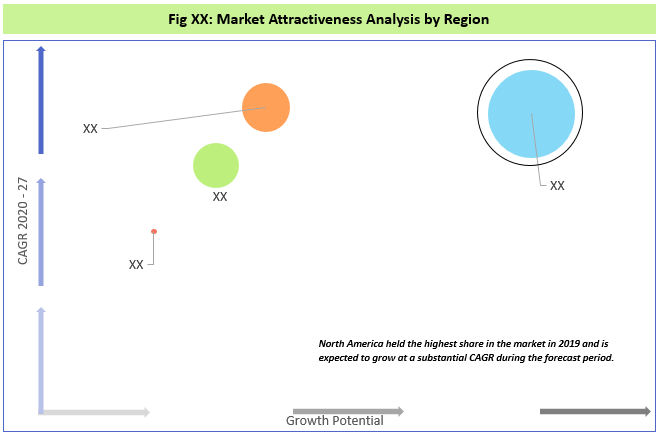 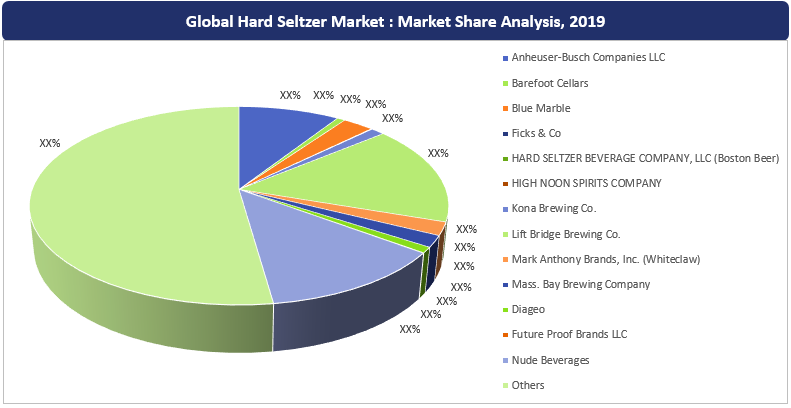 According to the Growth Market Reports report, the market from hard seltzer is likely to register a CAGR of 19.2% during forecast period 2020-2027, with an anticipated valuation of USD 14,482.0 million by the end of the 2027.

5. What are the factors driving the growth of Hard Seltzer market?

The market is expected to witness slow year on year growth from 2019 to 2020 owing to the slight negative impact of COVID-19 pandemic on the global hard seltzer market.

8. Which is the base year calculated in the global hard seltzer market report and what is analysis period?

Adults, elderly population, and young generation are the key end-users that are driving the growth of hard seltzer market.