The global Embedded Computer market was valued at USD 86,304 Million in 2019 and is projected to reach USD 1,38,747 Million by 2027, expanding at a CAGR of 6.3% during the forecast period. Embedded computing systems are commonly being used in a variety of applications including home applications, office automation, banking and financial institutions, security, automotive, protection, personal, healthcare, and other sectors. The demand for embedded computing has been driven by an increasing acceptance of consumer electronics and an increase in the adoption of artificial intelligence.

An embedded computer system is a combination of hardware and software designed to perform a particular dedicated operation on an electronic device or machine. Hardware and software are two distinct sections of any embedded computing device that are triggered by a series of commands called a program to function as a single system. The use of embedded computer is rising worldwide, especially in emerging economies due to growing industrial development activities. The expansion of the embedded computer market is attributed to major reforms made by various governments in their respective countries. Moreover, rise in industrial activities have fueled the use of embedded computer, as they reduce time and help become automated machine. Rising industrial development activities in emerging economies is projected to fuel the market in the near future. Other factors influencing the global embedded computing market include increasing digitization in healthcare & industrial automation and increasing demand in the automotive, defense and other sectors.

Market Dynamics
Rising demand for IoT services, increasing need for digitalization, and growing penetration of communication and networking technologies propel the demand for embedded computers. Advanced principal technologies and proliferation of devices fuel the growth of IoT technologies. Industrial automation uses control systems, including robots and Internet of Things (IoT) to handle various machineries and processes. These robots and IoT technology are based on embedded computers to offer high accuracy, precision, and enhanced performance of manufacturing processes.

Growing R&D investments across industries such as automotive, medical, aerospace, and electronics is creating opportunities for market players. The global market is driven by changing dynamics in the developing countries and product innovation. R&D expenditure is expected to grow at a significant pace during the forecast period, which in turn, is expected to increase the need for embedded system. The overall product improvements have increased the demand for embedded computer in various industries such as medical, automotive, and electronic. Rising demand for the embedded system in emerging and developed economies is projected to create opportunities in the market.

Embedded systems are playing an important role in the automotive industry. These systems are used in ADAS technology incorporated in the electric and hybrid vehicles. The increase in the demand for electric and hybrid vehicles owing to the growing awareness among masses about the depleting state of the environment has led to the growth of the embedded computer market. This propels the demand for embedded hardware and software that are used in EVs.

Based of product types, the embedded computer market is segmented into COMS, SBCs, standalone board, and others. The COMS segment accounts for a major share of the market; however, the SBCs segment is anticipated to expand at a high CAGR during the forecast period. Factors such as increase in the demand for fast product development, durability, consistency of COMs, and its competency of multichannel retailing are some factors fueling the COMS segment. The use of single board computers (SBCs) in notebooks, smartphones, and gaming systems is increasing owing to the development of the single board computers industry with upcoming technologies such as Internet of Things (IoT); therefore, the use of computers and smart technology in electronic devices is expected to propel the SBC segment during the forecast period. Advancements in technology, such as artificial intelligence (AI), has made the hardware more complex and compact, thus driving the need for SBCs in such computers. This, in turn, increases the market of SBCs in forecast period.

In terms of regions, the embedded computer market is divided into North America, Europe, Asia Pacific, Latin America, and Middle East & Africa. North America is expected to account for a large share of the market, followed by Asia Pacific. The market in Asia Pacific is projected to expand at a substantial CAGR during the forecast period. The large share of North America is attributed to the high implementation of technology and the presence of major vendors in the region. Moreover, rise in robotics and increase in applications of IoT in the region increase the demand for embedded computers. Rising per capita income and ongoing large-scale industrialization and urbanization are factors shows dynamic growth of the embedded computer market in Asia Pacific. Additionally, the accessibility of low-cost electronic products in Asia Pacific is expected to fuel the demand for microprocessors and microcontrollers in the region. Growing use of autonomous robots and embedded vision systems is projected to lead to a high demand for embedded system hardware such as microprocessors and controllers for the use in industrial applications in Asia Pacific. This, in turn, increases the demand in Asia Pacific in the coming years. 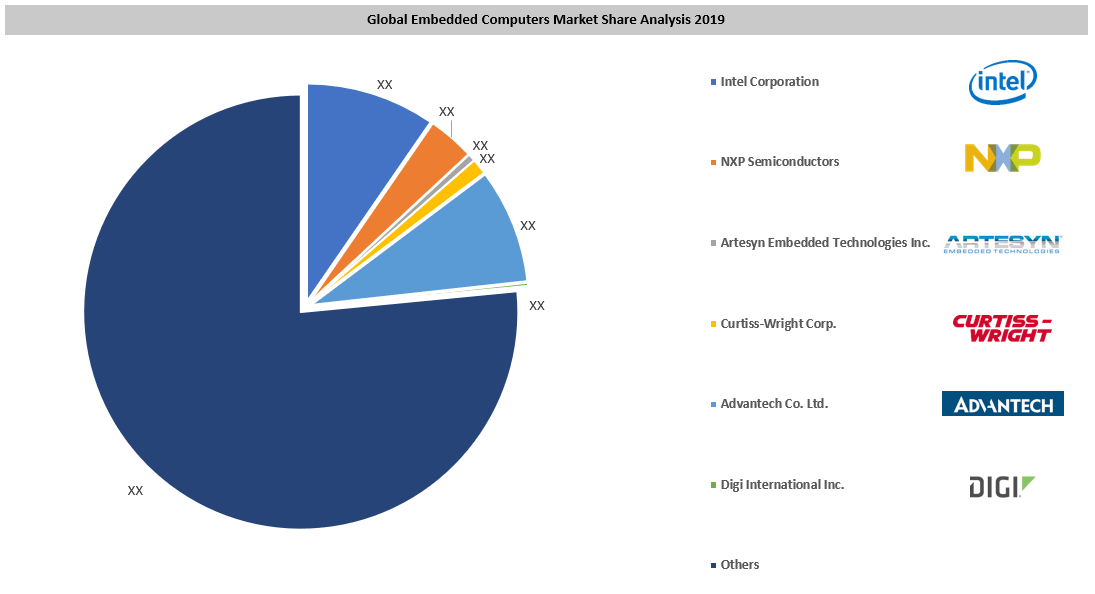 According to this Growth Market Reports report, the market from Embedded Computer is likely to register a CAGR of 6.3% during forecast period 2020-2027, with an anticipated valuation of USD 1,38,747 million by the end of the 2027.

In addition to market size (in USD Million) Company Market Share (in % for base year 2019), other data such Macro-economic factors, COVID-19 Impact on the value chain is available in final report.

5. What are the criteria used for selecting company profile?

6. What are the factors driving the growth of Embedded Computer market?

The demand for embedded computers is expected to continue to increase over the forecast period, taking into account energy efficiency measures at global level, thereby boosting the market for embedded computers. Technological developments, as well as declining prices of microcontroller devices, are also expected to have a favorable effect on the market over the forecast period.

The market is expected to witness a decrease of over 2-3% between 2019 and 2020 owing to the adverse impact of COVID-19 pandemic on the Embedded Computer market.

8. Which is the base year calculated in the global Embedded Computer market report and what is analysis period?