The global Heart Valve Replacement Market was valued at USD 4,372.3 Million in 2019 and is projected to reach USD 15,139.2 Million by 2027, expanding at a CAGR of 17.5% during the forecast period. Cardiovascular conditions are deteriorating day by day due to rapid changes in the lifestyle such as food consumption habits, lack of exercise and stressful work environment and work-life balance pressure which causes diseases such as aortic stenosis, regurgitation, atresia, prolapse, and valvular stenosis, which, in turn, is responsible for the death of more people than cancer and road accidents put together. Atresia, regurgitation or valvular inadequacy, prolapse and valvular stenosis are some major diseases associated with the heart valve. These diseases can be treated with the help of the replacement or repair of the heart valve.

Market Dynamics
Major factors driving the market are rising healthcare infrastructure, technology innovation, growing per capita disposable income, adoption of non-invasive technology, awareness regarding the significance of transcatheter devices. Additionally, the less mortality rate over conventional surgical methods, easier to use the device and increasing the success rate of replacing the mitral and aortic heart valve by using transcatheter method is rather better over traditional methods. Increasing prevalence of heart valve disease in Elderly Population and the growing prevalence of severe aortic stenosis disorder and mitral regurgitation. To solve problems about the fluid dynamics associated with the valve designs, various numerical methods have been introduced, which is expected to boost the heart valve replacement market. There are some factor which shows negative impact on the market such as the prohibitive cost of the transcatheter heart valves may interfere with the accessibility of the product in the developing countries of the world. Factors responsible for restraining the growth of the heart replacement market such as the risks and complications associated with heart valve surgeries, such as breathing problems and embolism, and inadequacy of primary healthcare infrastructure in developing countries.

On the basis of Material type, the global Heart Valve Replacement Market is divided as biological and mechanical. The mechanical valve segment is anticipated to expand at a CAGR of around 16% during the forecast period as majorly used to make mechanical heart valves are made from titanium and carbon. In biological segment, Bovine segment anticipated to expand at a CAGR approximately 15.7% during forecast period. 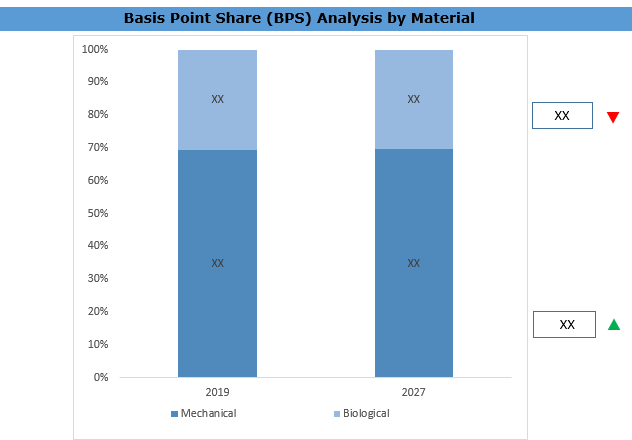 Based on position, the market is segmented into mitral valve, tricuspid valve, pulmonary valve, and aortic valve. The mitral valve segment is projected to hold a major share of the market during the forecast period as cases related to mitral valve increases.

Aortic Valve: The aortic valve is a valve in the human heart between the left ventricle and the aorta. It is one of the two semilunar valves of the heart, the former being the pulmonary valve. The heart has four valves; the other two are the mitral and the tricuspid valves. Aortic valve is located between the left ventricle and the aorta (the large blood vessel that carries blood to the rest of the body). When your ventricle contracts, blood is forced through the aortic valve, into the aorta, and out to the rest of your body. 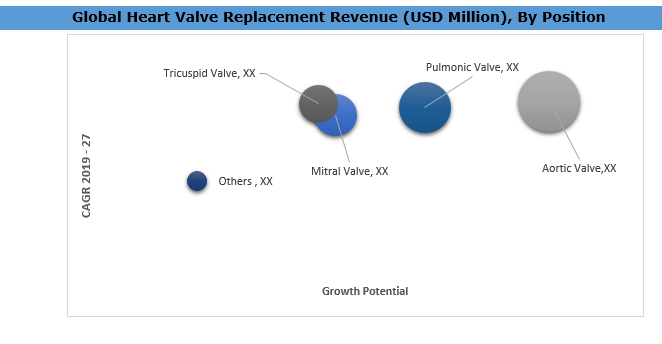 In terms of regions, the market is fragmented into North America, Europe, Asia Pacific, Latin America, and Middle East & Africa. North America is a promising region for the market. The region constituted around 35.5% share of the market in 2020. The market in the region is projected to expand at a CAGR of around 15.8% during the forecast period as there is increase in heart related diseases in North America, increasing focus of players in drug development and heart valve replacement therapy development, rise in government initiatives are some of the factors expected to boost the market growth on the region. 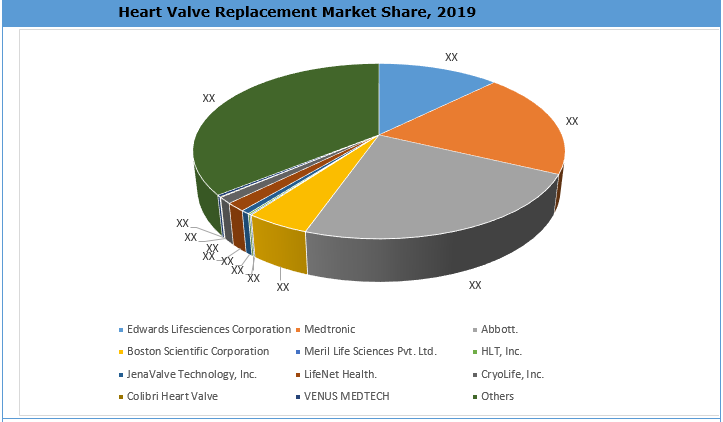 2. How big will be the heart valve replacement market in 2027?

According to this Growth Market Reports report, the market from heart valve replacement is likely to register a CAGR of around 17.5% during forecast period 2020-2027, with an anticipated valuation of USD 15,139.2 million by the end of the 2027.

4. What are the factors driving the growth of heart valve replacement market?

5. What are the factors included in Macro-economic factors?

6. What are the key End-users driving the market growth?

Hospitals are the key end-user that are driving the heart valve replacement market.

The market is expected to witness slight stagnancy between 2019 and 2020 owing to the slight impact of COVID-19 pandemic on the heart valve replacement market.

9. Which is the base year calculated in the global heart valve replacement market report and what is analysis period?