North America Phosphate Market was valued at USD 1,820.0 Mn in 2019 and is projected to reach around USD 2,062.7 Mn by 2027, expanding at CAGR of 3.5% during the forecast period. In terms of volume, the market is estimated to expand at a CAGR of 1.8% between 2020 and 2027. The term phosphate or phosphate rock is used to denote any rock, which has high phosphorus content. Mining is considered to be the least expensive and largest source of phosphorus, due to the presence of several phosphate mines around the world. Phosphate is a chemical compound which is related to phosphoric acid (H3PO4). One group of these derivatives is composed of salts containing the phosphate ion (PO43−), the hydrogen phosphate ion (HPO42−), the dihydrogen phosphate ion (H2PO4−), and positively charged ions such as those of sodium or calcium. The hydrogen atoms of phosphoric acid are replaced by organic combining groups such as ethyl (C2H5) and phenyl (C6H5) in phosphate.

Generally, phosphate is considered an essential element for animals and plant's nutrition and they have primarily used as a component of the nitrogen-phosphorus-potassium (N-P-K) fertilizer. Phosphates are used by the biological systems (cells) for the development of important molecules such as ATP and ADP. These molecules are involved in the metabolism pathway of the respiration. They are also in in the DNA and RNA. Phosphates, in which the sodium and potassium phosphates are widely used as acidity regulators in the food industry. 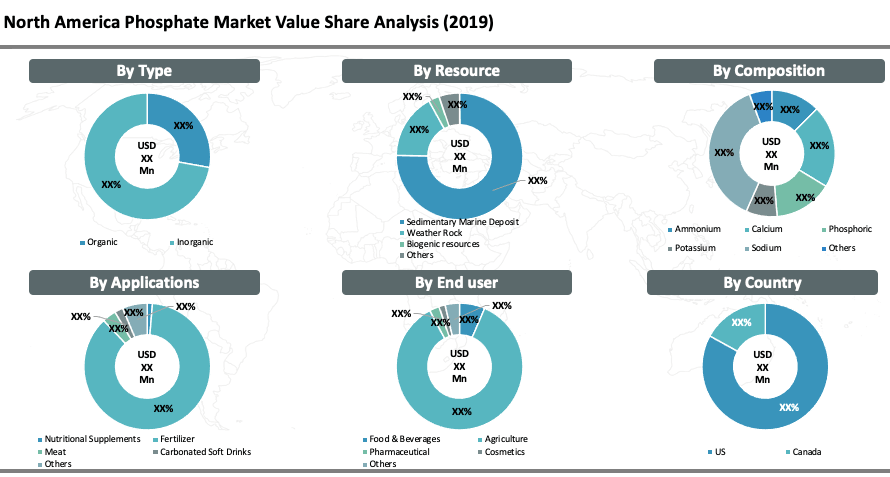 Market Dynamics
North America phosphate market is expected grow due to the increase in usage of phosphate in the pharmaceutical industry and rise in crop production. Rising use of phosphate in batteries for electric vehicles and improved hard process (IHP) for phosphoric acid production is anticipated to create opportunities in the market. However, growing cost of fertilizers and increasing awareness about side effects of phosphate are expected to restrain the market. 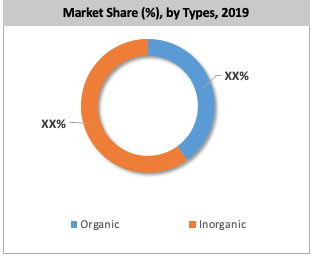 In terms of resources, the phosphate market is classified as sedimentary marine deposit, weathered rock, biogenic, and others. The sedimentary marine deposit segment accounted for major share of the market in 2019 and is anticipated to expand at a significant CAGR of during the forecast period. Marine sediment is any deposit of insoluble material, primarily rock and soil particles, which is transported from land to the ocean by wind, ice, and rivers. Most biogenic sediments are erosion products of unconsolidated or consolidated marine detrital deposits or erosion products of framework- building organisms. The rapid rise in sea level during the last deglaciation period resulted in a sharp decrease in the sediment supply from the river to the deep‐sea fan system. This, in turn, increases the demand for sedimentary marine deposit.

Definitions
Weathered Rock
Weathering is the breaking down or dissolving of rocks and minerals on earth’s surface. When a rock has been broken down, a process called erosion. After erosion, rock and minerals get separate. Phosphate rock is a non-renewable natural resource. Most phosphate rock is mined using large-scale surface methods. Earlier, underground mining methods played a greater role, but their contribution to world production is declining. Frequently extraction operations supply feed to a nearby fertilizer-processing complex for the production of downstream concentrated fertilizer products.

Biogenic
Phosphorus (P) is present in waterways. Biogenic is source where phosphate derived from living organisms. Agriculture which consist of particularly livestock production that has been identified as a major source of biogenic. Excess manure P applied to croplands has increased P losses in runoff, leading to surface water eutrophication. Manures are added to supply the same total P rate to soils with different antecedent plant-available P concentrations. There was a strong synergistic effect between dairy manure and soil test P on water extractable P. 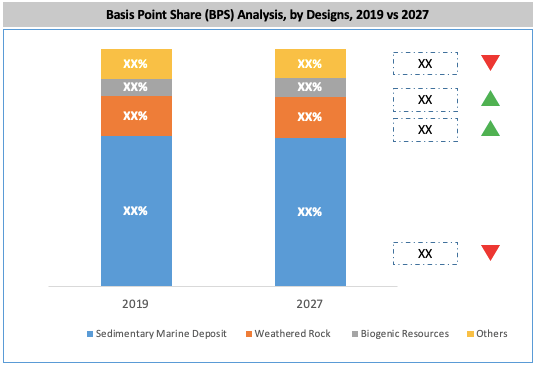 Calcium
Calcium is principal minerals for the production of phosphate fertilizers and for a range of phosphorus compounds. For example, the tribasic variety (precipitated calcium phosphate), Ca3(PO4)2, is the principal inorganic constituent of bone ash. The acid salt Ca(H2PO4)2, produced by treating mineral phosphates with sulfuric acid which is active as a plant food and stabilizer for plastics. Calcium phosphate appears as a white amorphous or crystalline powder that is odorless and tasteless.

Phosphoric
Phosphoric acid, also referred to as phosphoric(V) acid or orthophosphoric acid is popular and most used acids. The raw form of this acid is extracted from phosphate rocks, whereas more pure form is produced industrially from white phosphorus. Pure phosphoric acid is usually in a crystalline solid-state and in less concentrated form. Generally, it is a colorless, syrupy, odorless, and non-volatile liquid. Phosphoric acid which is also a mineral acid is represented by the formula H3PO4 and it contains one atom of phosphorus, four atoms of oxygen, and three atoms of hydrogen. 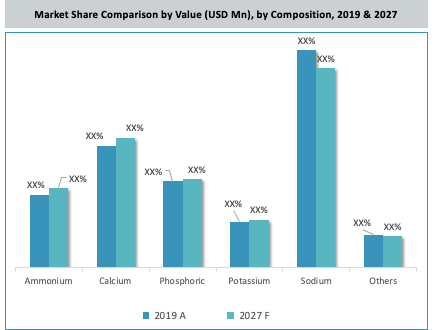 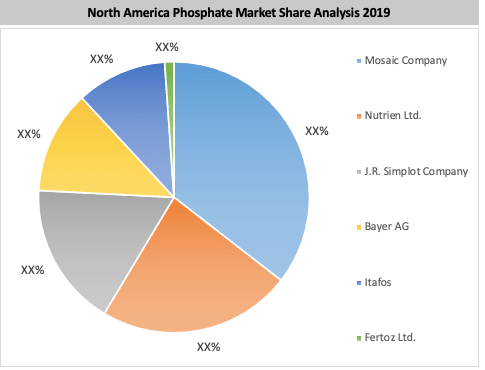 2. Does this report also cover types of phosphate?

Yes, the report covers types of phosphate such as organic and inorganic.

3. How big will be the North America phosphate market in 2027?

According to this Growth Market Reports report, North America phosphate market is likely to register a CAGR of 3.5% during forecast period 2020-2027, with an anticipated valuation of USD 2,062.7 million by the end of the 2027.

In addition to market size (in USD Million) and company market share (in % for base year 2019), other data such macro-economic factors, COVID-19 Impact, and import-export data of phosphate is available in final report.

5. What are the factors driving the growth of North America phosphate market?

The market is driven by the increase in usage of phosphate in the pharmaceutical industry and rise in crop production.

6. What are the key applications driving the market growth?

Nutritional supplements, fertilizer, meat, carbonated soft drinks, and others are the key applications that are driving the North America phosphate market.

The market is expected to witness negative growth owing to the negative impact of COVID-19 pandemic on the phosphate market.

9. Which is the base year calculated in the North America phosphate market report and what is analysis period?