The global fluorspar market was valued at US$ 2,200.0 Million in 2019 and is projected to reach US$ 2,612.2 Million by 2027 expanding at a CAGR of 3.0 % during the forecast period, 2020-2027. Fluorite, also known as fluorspar, is a naturally occurring mineral composed of calcium fluoride CaF2. It belongs to halide minerals group. Fluorite is easy to identity owing to its properties such as hardness, cleavage in its structure, and specific gravity of fluorite. It is the only common mineral which has perfect four directional cleavage often when it breaks into pieces, in the shape of an octahedron.  It is also used and known for its hardness which represents hardness of four in Mohs hardness scale. It is one of the important industry mineral used for numerous applications.

Fluorite is graded into three categories for commercial purposes. First grading is known as metallurgical grade, which is composed of 60% to 85% of calcium fluoride and is majorly used in steel production, and cement production. The second grade is known as ceramic grade, which includes 85% to 95% of calcium fluoride and it is widely used for producing enamel, nonstick cooking utensils, and certain types of glass. The third and the highest grade of fluorite is known as acid-grade fluorspar. Acid grade fluorspar is used for the production of hydrofluoric acid. It is used in aluminum smelting.

Fluorite is used in a wide range of industries for various applications including the chemical industry, metallurgical industry, ceramic industry, and glass industry. The demand for fluorspar for producing steel, aluminum, and glass is increasing rapidly. Fluorspar is used in the chemical industry for producing fluoro chemicals. Mining of fluorite can cause severe effects on environment; therefore, there are stringent regulations and rules have been imposed by governments on the mining industry for ensuring safety in mining procedures. 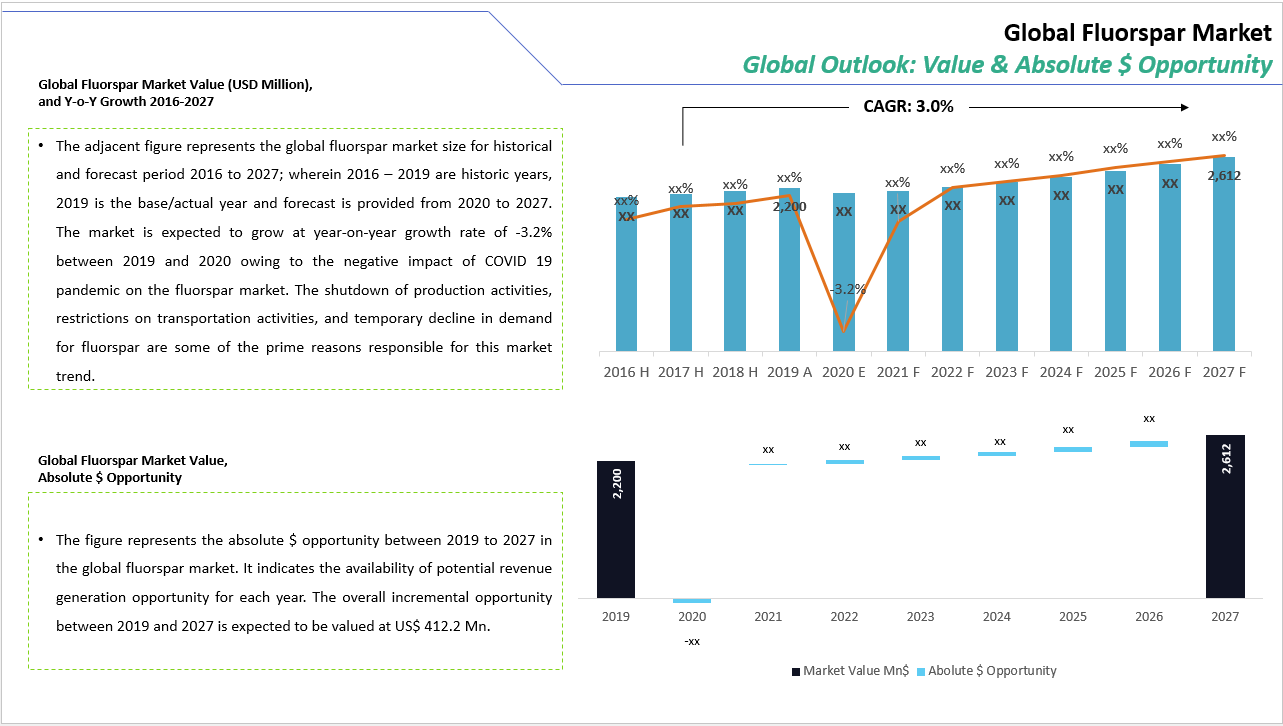 The market is driven by factors such as increasing use of fluorite in cement, continuous rise in population globally has led to increase in the demand for residential and commercial buildings, rising adoption of aluminum in the automotive industry, as customer preference for lightweight vehicles is increasing day by day. Aluminum is lighter in weight than iron and steel; therefore, it a suitable material for making vehicle parts, growing demand for hydrofluoric acid globally, rising steel & aluminum production in Asia Pacific, rising demand for fluorocarbons in numerous applications has generated the need for fluorocarbon production, these are the major factors expected to propel the market growth. However, availability of cheaper alternatives and substitutes, impact of fluorite mining on environment, and stringent government regulations for mining activities are key factors restraining the growth of market.

Moreover, innovation of such technologies cause minimum harm to the environment and human life due to mining, rapid industrialization in emerging economies such as China and India are the major reasons expected to create ample opportunities for innovation in the mining industry. Furthermore, Key players in the fluorspar market are focusing on developing products and technologies, owing to the increasing demand for fluorspar by several industries, and increasing usage of fluorspar in refrigerants are major trends in market, which in turn is expected to gain rapid traction and boost the market growth during the forecast period.

In terms of product types, the global fluorspar market is segmented into acidspar, metaspar, and ceramic. The acidspar segment is projected to expand at significant CAGR of during the forecast period.  Acidspar is used for the production of hydrofluoric acid, which is used to manufacture a variety of products including fluorocarbon chemicals, foam blowing agents, refrigerants, and fluoride chemicals. Fluorspar is the commercial name for mineral fluorite. It belongs to the halide mineral, and is an important industrial mineral composed of calcium and fluorine. Naturally occurring fluorite is divided into three-grades, as per percentage of calcium fluoride.  Fluorspar is divided into acid-grade, ceramic-grade, and Metallurgical-grade. Fluorspar is developed in the form of cubic crystals and is available in a wide range of colors. The end-use of fluorspar is determined by the-grade of the fluorspar (calcium fluoride CaF2) in the metallurgical, ceramics, and chemical industries. Increasing demand of acidspar, for manufacturing of hydrofluoric acid has led to surge the demand for acid-grade fluorspar and is expected to boost the demand for acidspar during the forecast period. 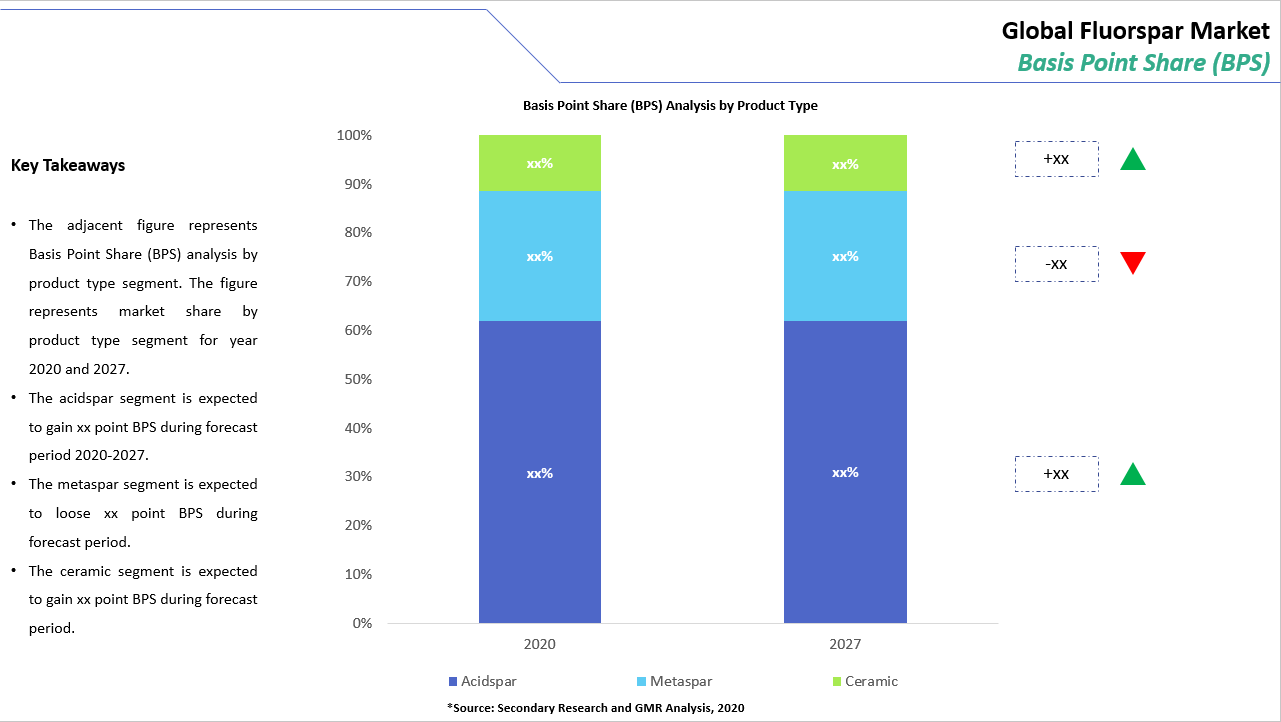 Rising demand for fluorochemicals from end-user industries and increasing production of aluminum and steel are propelling the market. Aluminum, steel, glass are widely used by industries for numerous applications. Increasing population and rising demand for consumer goods, automobiles, food and beverages, pharmaceuticals products, and electronic products are increasing the consumption of glass, steel, and aluminum and driving the demand for production of these materials. This, in turn, is expected to boost the market growth and create opportunities for the mining of fluorspar in large quantities in the near future.

In terms of regions, the market has been fragmented into North America, Europe, Asia Pacific, Latin America, and Middle East & Africa. Asia Pacific is a promising region for the market owing to huge production & exports from China. China is the largest exporter and producer of fluorspar globally and is expected to remain a key driver for Asia Pacific market growth. Increasing downstream activities in China is expected to drive market growth in the region. North America fluorspar market is also expected to grow during the forecast period. The US is the one of the major consumers of the product and due to the less production of fluorspar in the country, maximum quantity of the product is imported from Mexico. In US the product is mainly used for manufacture hydrofluoric acid and other fluorine compounds.

2. Does this report cover volume data?

Yes, the global fluorspar market volume for historical and forecast period 2016 to 2027 is provided in report.

According to this Growth Market Reports report, the market from fluorspar is likely to register a CAGR of 3.0% during forecast period 2020-2027, with an anticipated valuation of US$ 2,612.2 million by the end of the 2027.

In addition to market size (in US$ Million), Market Volume (in Million Tons), and Company Market Share (in % for base year 2019), short term and long term outlook for fluorspar market is available in final report.

5. What are the factors driving the growth of fluorspar Market?

Increasing use of fluorite in cement, iron & steel, and glass industries, growing construction and infrastructure activities, growth of the automotive industry, growing demand for fluorocarbons is driving the market growth during forecast period.

6. What are the key Applications driving the market growth?

The market is expected to grow at year-on-year growth rate of -3.2% between 2019 and 2020 owing to the negative impact of COVID 19 pandemic on the fluorspar market. The shutdown of production activities, restrictions on transportation activities, and temporary decline in demand for fluorspar are some of the prime reasons responsible for this market trend.

9. Which is the base year calculated in the global fluorspar market report and what is analysis period?