Market Dynamics
Latin America is experiencing rapid urbanization in the last decade. This is encouraging people to migrate to the cities from the rural areas. Cities are seeing sudden growth in population and rise in the number of vehicles. Most cities in Latin America have colonial architecture with narrow roads. This is making the circulation of vehicles hard in today’s age. Lack of proper planning of roads and increasing vehicles on the streets are fueling the number of collisions. Moreover, newly paved roads prompt drivers to speed their vehicles, which increases the risk of collision on crowded roads. Growing number of vehicle collisions is driving the automotive refinish market in Latin America. Furthermore, growing demand for refinishing of automotive is increasing disposable income across developing economies in Latin America. Factors such as rapid growth in economy and rise in standard of living, are propelling the use of automotive refinishing. Furthermore, refinishing service and product providers are focusing on research & development activities to improve their offerings and the features of their products, thus driving the demand for these products. Hence, growing need for automotive refinishing products is anticipated to drive the market during the forecast period.

However, Paints and coatings used for the refinishing of vehicles are known to cause air pollution by emitting volatile organic compounds (VOCs). VOCs are organic, carbon-based compounds that easily vaporize or turn into gases. VOCs usually contain chlorine, bromine, nitrogen, and sulfur. These compounds can turn toxic when they come in contact with the environmental elements. Moreover, heavy metals such as chromium, lead, and cadmium are released in the air while sanding and welding. Inhaling these metals can turn fatal over time. Governments and environmental associations in the region are taking strict actions and implementing rules to reduce and stop these emissions. This, in turn, is hampering the automotive refinish market.

By Product Types Segment
In terms of Product Type, the Latin America automotive refinish market is segmented as Primer, Basecoat, Fillers, Topcoat, others. The topcoat segment accounts for a major share of the market and is anticipated to expand at a considerable CAGR during the forecast period. The growth of the topcoat segment is due to the fact that these coats are used as final coats on body of vehicles. Topcoats seals the paint and protects it from external factors such as rain wind, snow and UV radiation. Basecoat segment is growing following the topcoat segment. This segment is growing as it is used to get smooth finish on the vehicles body before painting it. 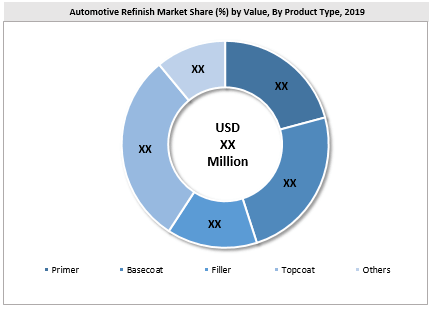 By Resin Types Segment
On basis of Resin Type, the Latin America automotive refinish market is categorized as Acrylic, Alkyd, Polyurethane, and others. The Polyurethane segment accounts for a major share of the market and is expected to increase at a substantial CAGR during the forecast period. Acrylic segment is growing after polyurethane segment, as acrylic based paints are widely used for smaller or quick fix jobs. Such jobs are more frequent than full body refinish jobs. Polyurethane segment is growing owing to its superior properties such as resistance to extreme temperatures and excellent performance in various environmental condition. 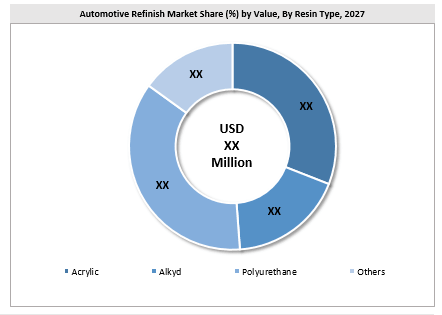 By Technology Used Segment
Based on technology used, the global Automotive Refinish market is classified as Waterborne, Solvent borne, and UV-cured. The waterborne segment accounts for a foremost share of the market and is projected to expand at a significant CAGR during the forecast period. UV cured technology is expected to grow in future as it provides, fast curing which reduces the time taken to refinish the vehicle. And these paints are resistant to water and other environmental factors. Solvent Borne segment is expected grow at slow pace compared to waterborne product due to stringent regulation on VOC emission level by governments of various countries. 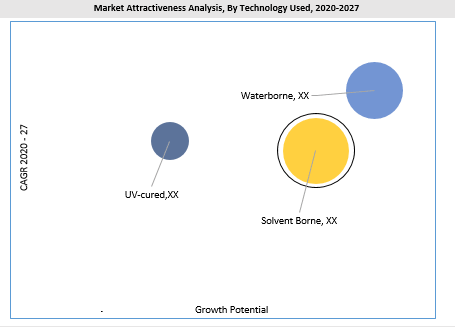 Urbanization in Mexico is growing at a significant pace. This has increased disposable income of people. Economically feasible conditions have raised expenditure on refinishing old and new vehicles. This is expected to drive the automotive refinish market in the country during forecast period. Mexico ranks second in terms automotive paints and coatings production in Latin America of Automotive paints and coating industry is growing at a substantial speed in Mexico, which is resulting into growth of automotive refinish market 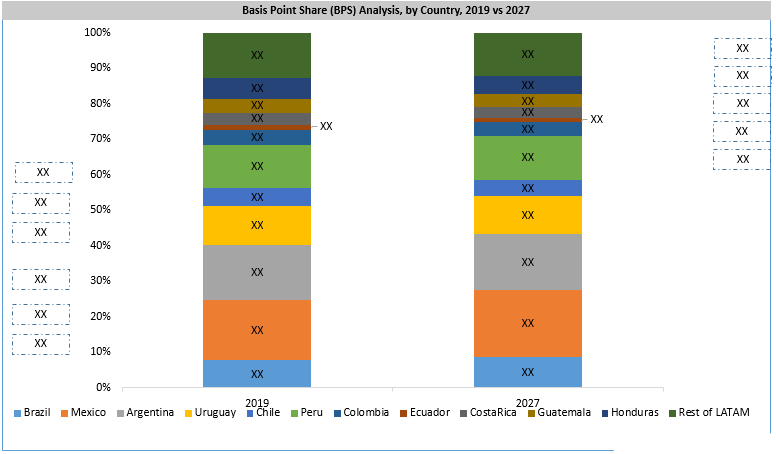 2. Does this report also cover types of automotive refinish products?

Yes, the report covers product types of automotive refinish such as primer, basecoat, filler, topcoat, and others.

3. How big will be the automotive refinish market in 2027?

According to this Growth Market Reports report, the market from Automotive Refinish market is likely to register a CAGR of 4.1% during forecast period 2020-2027, with an anticipated valuation of USD 1,021.8 million by the end of the 2027.

In addition to market size (in USD Million) and Company Market Share (in % for base year 2019), other data such Macro-economic factors, COVID-19 Impact on the automotive refinish market is available in final report.

5. What are the factors driving the growth of automotive refinish market?

The automotive refinish market is anticipated to grow significantly during forecast period due to rising number of vehicles on roads which is causing more vehicle crashes than before. Moreover, due to increasing population as well as rapid urbanization.

6. What are the key end use industries are driving the market growth?

The market is expected to witness sluggish growth with slow increase in terms of demand during 2019-2020 owing to the negative impact of COVID-19 pandemic on the automotive refinish market.

9. Which is the base year calculated in the Latin America automotive refinish market report and what is analysis period?