The North America anti-corrosion coating market was valued at USD 5,479.1 Million in 2019 and is projected to reach USD 7,547.5 Million by 2027, expanding at a CAGR of 4.8% during the forecast period. Anti-corrosion coating slows down or eliminates electrochemical reactions that adversely decorate the structural integrity of metals and modify its corrosion-induced appearance. This anti-corrosion coating property makes it beneficial to a wide variety of end-user industries such as energy (power plants, solar, and wind turbines), oil & gas, construction, industrial, automotive, marine, and other industries. Solvent-bearing, water-bearing, anti-corrosion powder coating and high-energy curing coating are commonly used technologies.

Market Dynamics
The demand for anti-corrosion coating is driven by factors such as growing offshore exploration operations, expanding oil & gas activities in North America, increasing disruptions due to corrosion, modernization of facilities, and developments in end-use industries. However, the market is likely to be restricted by the entrance of local players into the market, the implementations of volatile organic compound (VOC) control regulations, and fluctuating raw material prices.

The market is fragmented and a large part of the overall market share is made up of regional players, and thus it is highly price sensitivity. Moreover, low initial investments have increased the threat of new entrants, particularly in emerging and developed economies. The anti-corrosion market; therefore, faces strong competition, which is projected to remain high during the forecast period.

On the basis of types, the North America anti-corrosion coating market is segmented as epoxy, polyurethane, acrylic, alkyd, zinc, chlorinated rubber, and others. The epoxy segment is projected to lead the market during the forecast period owing to the growing demand for epoxy coatings from the marine, oil & gas, and infrastructure industries. Increased demand for acrylic coatings is projected to fuel the market between 2020 and 2027. These coatings provide better mechanical and structural properties than other anti-corrosion coatings such as vinyl and alkyd coatings. Acrylic coatings have high color retention quality and are chemically inert. 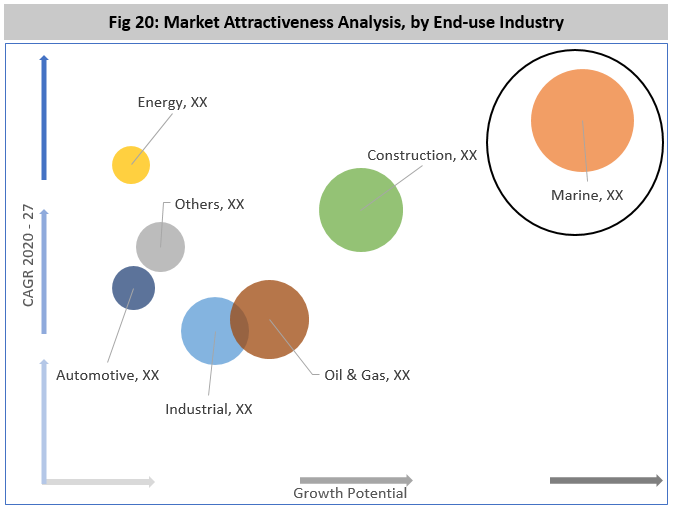 On the basis of country, the North America anti-corrosion coating market has been bifurcated into the US and Canada. The US is a promising country of the market. The market is this country constituted 76.5% share of the North America market in 2020. The market in Canada is projected to expand at a CAGR of 4.5% due to the increase in government spending and rise in R&D investments in the country.

3. How big will be the Anti-corrosion coating market in 2027?

According to this Growth Market Reports report, the market from anti-corrosion coating is likely to register a CAGR of 4.8% during forecast period 2020-2027, with an anticipated valuation of USD 7,547.5 million by the end of the 2027.

In addition to market size (in USD Million) and Company Market Share (in % for base year 2019), other data such as COVID-19 impact, North America based distributor list is provided, for Anti-corrosion coating market is available in final report.

5. What are the factors driving the growth of Anti-corrosion coating market?

Growing industrialization, rapid development of the construction industry, increasing government initiatives in construction market, and increase in R&D expenditure by manufacturers for developing new anti-corrosion coating is expected to drive the market growth during forecast period.

6. What are the key end-user industries driving the market growth?

Marine, oil gas, industrial, construction, energy, automotive, and others are the key end-use industries that are driving the anti-corrosion coating market.

The market is expected to witness declining of over 3.0% between 2019 and 2020 owing to the considerable impact of COVID-19 pandemic on the Anti-corrosion coating market.

9. Which is the base year calculated in the North America anti-corrosion coating market report and what is analysis period?