The global nitinol-based medical device market was valued at USD 14,511.0 Million in 2019 and is projected to reach USD 30,899.4 Million by 2027, expanding at a CAGR of 10.6% during the forecast period. Nitinol is an alloy composed of titanium (Ti) and Nickel (Ni) alloys. Nitinol has high elasticity and is resistant to corrosion. Nitinol (NiTi), is a shape memory alloy that finds its application in several medical devices. A shape memory alloy can restore its original shape after deformation. Nitinol is an essential material for medical devices and instruments due to its biocompatibility and super-elasticity. Nitinol finds application in the manufacturing of catheter tubes, guidewires, stone retrieval baskets, filters, needles, dental files, arch-wires, and other surgical instruments. The market is driven by factors such as rising prevalence of cardiovascular diseases has led to rise in the adoption of the nitinol stents, which drives the demand for nitinol stents.

Several self-expanding implants, including stents and filters, use thermal shape-memory of nitinol to activate its working into the body. Some of the medical applications of nitinol include intravascular stents, radiofrequency interstitial tissue ablation device, orthodontic archwires, and inferior vena cava (IVC) filters. Nitinol is used in stents, as they have is a flexible tubular structure, which have folded small dimensions that offer movement in difficult locations in the body and expanding the vessels. Stents are used to treat weakened coronary arteries in the body. Self-expanding stents use thermal shape memory of nitinol to expand the vessels in the body. Growing prevalence of arterial diseases has led to the adoption of nitinol-based medical devices, especially for restoring predetermined shape of the arteries.

The nitinol based medical devices are used in treatment of several diseases. Nitinol is an essential material in the medical field. Some of the properties of nitinol including nitinol the shape memory alloy is one of the unique properties, which has led to the change in the shape of the nitinol. The nitinol changes its shape to its original shape owing to the elasticity of the materials. The shape change property of nitinol is higher than the plastics material. The nitinol alloys are super elastic, therefore the curves of the nitinol alloys becomes flat after the application of pressure on the strains. This process is used for the application of the stress on the nitinol wires. This process is used for the dental treatment. The design of the nitinol-based medical devices are less complex, which helps in the sterilization and cleaning of the materials.

Rise in the prevalence of chronic diseases has led to the rise in the demand for the introduction of new medical devices for treatment of diseases, which in turn, boosts the demand for the nitinol-based medical devices market. Increase in investments in R&D has led to the rise in introduction of new devices, which in turn contributes to the growth of the market. Rise in urbanization has led to the adoption of sedentary lifestyle. This has increased the prevalence of chronic diseases worldwide. According to the Center for Disease Control (CDC), 30.3 million people in the US had cardiovascular diseases in 2018. Increase in occurrence of cardiovascular diseases has propelled spending on surgical procedures, thereby driving the demand for nitinol-based medical devices.

Market Dynamics
The market is driven by factors such as increasing investment in research & development, growing awareness among consumers for healthcare, and rising awareness for healthcare by the government boost the growth of the market. Conversely, high cost of the medical devices are some of the factors which hampers the growth of the market. Rising adoption of new technology in emerging markets and technological development in manufacturing of nitinol-devices is expected to boost the growth of nitinol-based medical devices. 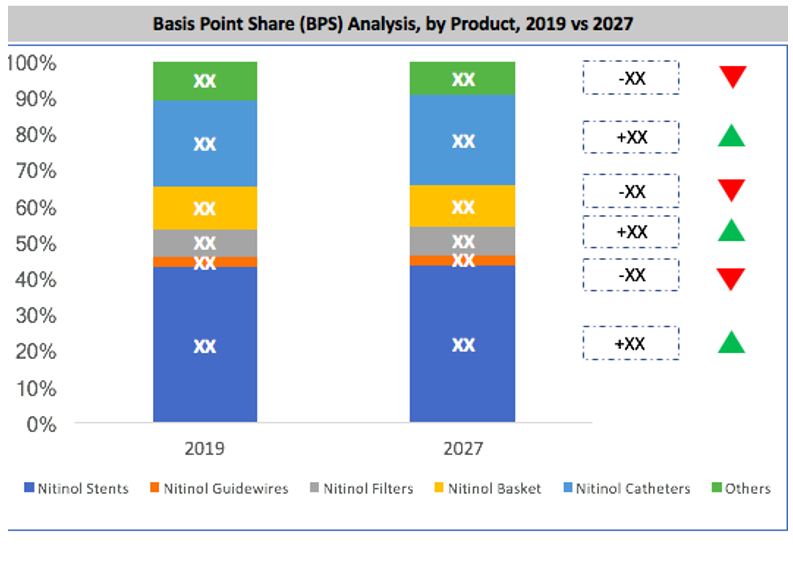 In terms of application, the nitinol-based medical device market is segregated into orthopedic, vascular, dental, gastroenterology, and others. The vascular segment is anticipated to expand at a CAGR of 11.0% during the forecast period. Increase in the prevalence of vascular diseases has led to the adoption of the nitinol stents for the treatment of diseases, thereby boosting the segment. 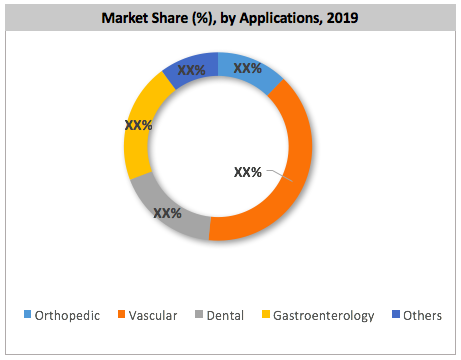 In terms of end-users, the nitinol-based medical device market is classified as hospitals, clinics, ambulatory care centers, and others. The hospitals segment is anticipated to expand at a CAGR of 11.0% during the forecast period, as large number of treatment is taken in the hospitals by the patients, which drives the growth of the segment.

In terms of regions, the global Nitinol-based Medical Device Market is fragmented into North America, Europe, Asia Pacific, Latin America, and Middle East & Africa. North America constituted market share of 40.5% in 2020. The market in the region is projected to expand at a CAGR of 10.7% during the forecast period. Increasing adoption of new technology in healthcare industry and rise in presence of several manufacturers, is thereby boosting the growth of the nitinol-based medical devices market in North America. 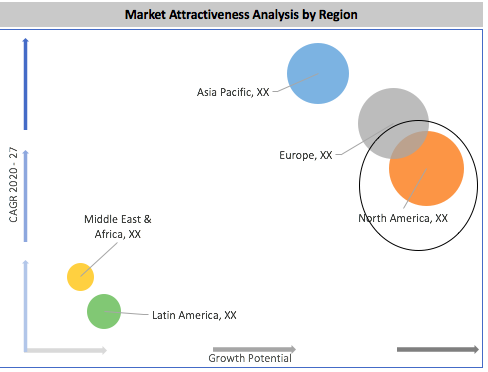 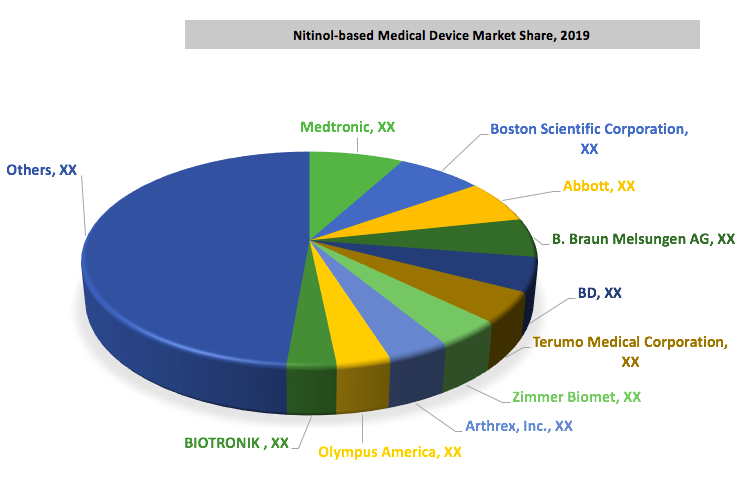 3. How big will be the Nitinol-based Medical Device Market in 2027?

According to this Growth Market Reports report, the market from nitinol-based medical device market shall probably to register a CAGR of 10.6% during forecast period 2020-2027, with an anticipated valuation of USD 30,899.4 million by the end of the 2027.

In addition to market size (in US$ Million) and Company Market Share (in % for base year 2019), other data such as pipeline analysis, recent advancements, and impact of key regulations is available in final report.

5. What are the end-users driving the market growth?

6. What are the factors driving the growth of Nitinol-based medical devices market?

The rising prevalence of cardiovascular and peripheral arterial diseases, are expected to drive the market growth during forecast period.

9. Which is the base year calculated in the global nitinol-based medical device market report and what is analysis period?

Major Manufactures include, Abbott, Medtronic, Boston Scientific Corporation are the key players operating in the market.