The global bicycle brake components market was valued at USD 33.6 Million in 2019 and is projected to reach USD 48.6 Million by 2027 expanding at a CAGR of 5.8 % during the forecast period, 2020-2027. Bicycle brakes are considered to be one of the prominent parts of a bicycle, as they decelerate the force reducing the speed and halting the cycle. The components of the braking system such as disc brake, rim brake, coaster brake, duck brake, and drag brake are often made from aluminum due to its properties such as lightweight, strength, and corrosion-resistance. Other components of a bicycle’s brakes include brake pedal, brake pads, rear brakes, and hand lever. Bicycle brake components are different for various bicycles, as they are differentiated on the basis of applications such as downhill vehicles and mountain bike vehicles.

Market Dynamics
The global bicycle brake components market is driven by factors such as increasing demand of bicycle in rural area. Advancements in bicycles such as the introduction of e-bikes and the addition of various bicycle segments such as racing bikes, kid bikes, and fitness bikes. Moreover, growing number of bicycle brake manufacturers is expected to crate traction and boost market growth during the forecast period.

In terms of types, the global bicycle brake components market is segmented into rim brake, disc brake, drum brake, coaster brake, drag brake and band brake. The disc brake segment is expected to hold a significant share of the market, and is projected to expand at high CAGR during the forecast period. Rim brakes are said to be one of the most effective braking systems; therefore, they’ve been extensively used for many years. Disc brakes are not connected to the rim; therefore, they work even if the tires are warped, thereby providing superior braking. These factors have significantly increased the demand for these breaks in the past few years. Conversely, drum brakes are considered to be weather resistant and are commonly used in utility bicycles and commuter bikes. The drum brakes mechanism work with a cable that is attached to the hand lever and gets triggered as the lever is pulled. The large drum braking system provides stronger braking than the smaller ones, as the braking power of the drum brakes depends upon its size. 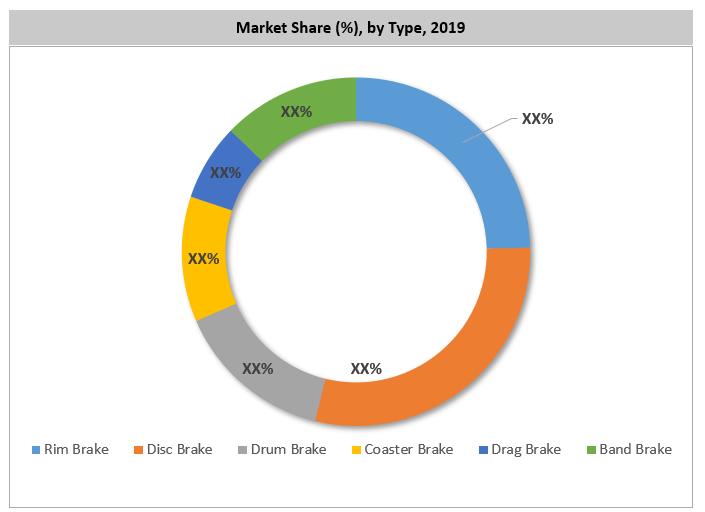 Based on applications, the global bicycle brake components market is classified as road bikes, sports bikes, hybrid bikes, mountain bikes, and others. The road bikes segment is expected to hold a significant share of the market. The demand for road bikes is increasing rapidly owing to its growing demand, which in turn, fuels the need for bicycle brakes. Road bikes are efficient and lightweight, with drop handlebars and narrow tires to provide smooth riding on the roads. These bikes are not used to carry heavy loads and are unsuitable for touring or commuting. A major trend in the road bikes industry is the usage of disc brakes, which improves tire clearance and rolling efficiency of low-pressure tires. Cyclocross bikes are used for cyclocross races, which span for short durations but require high physical effort. These bikes are similar to road bikes; however, they are designed to provide good controlling under slow speed and decent braking in muddy terrains. Moreover, mountain bikes consist of either a disc brake, a rim brake, or a coaster brake. Disc brakes are predominantly used in this category of bicycles.

In terms of regions, the market has been fragmented into North America, Europe, Asia Pacific, Latin America, and Middle East & Africa. Countries such as, Taiwan, China, and Japan, are actively engaged in foreign expansions, due to increasing population and availability of niche resources. Moreover, countries such as Japan and Taiwan are leading manufacturers of bicycles, which attract large number of industries from the region. North America holds the highest value share in 2019 whereas Asia Pacific is expected to expand at highest CAGR during the forecast, followed by Latin America and the Middle East & Africa. 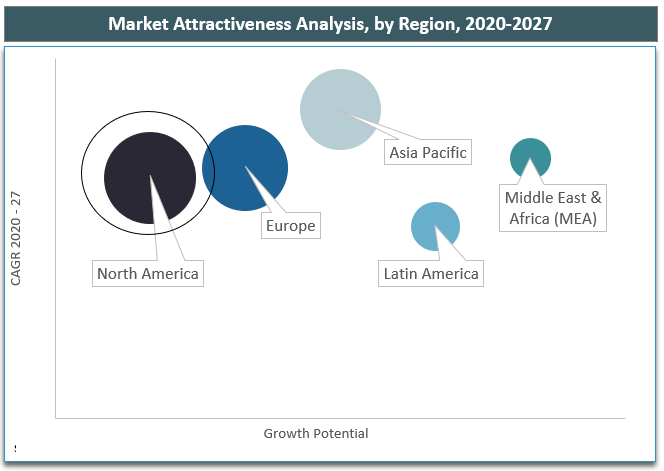 2. Does this report cover sales data?

3. How big will be the bicycle brake components Market in 2027?

According to this Growth Market Reports report, the bicycle brake components market is likely to register a CAGR of 5.8% during forecast period 2020-2027, with an anticipated valuation of USD 48.6 million by the end of the 2027.

In addition to market size (in USD Million), Volume (‘000 units), and Company Market Share (in % for base year 2019), short term and long-term outlook for bicycle brake components market is available in final report.

5. What are the criteria used for selecting company profile?

6. What are the factors driving the growth of bicycle brake market?

Increasing preference of people towards bicycle, growing health concerns, rising awareness about pollution, growing population, and increasing prices of fuel are some of the major factors expected to drive the market growth during forecast period. Moreover, high availability of bicycles, spare parts and increasing number of events also boost the sales of bicycles which in return increases demand for bicycle parts such as bicycle brake components.

7. What are the key applications driving the market growth?

The market is expected to show significant decline between 2019 and 2020 owing to the negative impact of COVID 19 pandemic on the bicycle brake market. The shutdown of production activities, restrictions on transportation activities, and temporary decline in demand for bicycle brake are some of the prime reasons responsible for this market trend.

9. Which is the base year calculated in the global bicycle brake components market report and what is analysis period?