The Indonesia DHA oil market was valued at USD 47.7 million in 2019 and is projected to reach USD 133.3 million by 2027, expanding at a CAGR of 13.4% during the forecast period. In terms of volume Indonesia DHA oil market was valued at 59.5 tons and expected to grow at CAGR of 12.6% during forecasted timeline. Docosahexaenoic acid (DHA) is a one of the chief components of omega 3 fatty acids, it has several health benefits. DHA is a part of a cell in body and plays a vital role in brain development, infancy, pregnancy, and others. To gain the daily dosage of DHA, people consume DHA supplements sourced from fish oil, krill oil, algal oil, and DHA rich foods such as dietary supplements, juices, cow milk, and poultry eggs, among others. In infant formulae, DHA is main a component added, as it is effective for the brain development of infants, it also has several applications in healthcare such as for treating attention-deficit hyperactivity disorder (ADHD) and to reduce the risk of preterm birth. DHA has antioxidant and anti-inflammatory properties. Fish oil is an essential factor for the reduction of ailments such as depression, menstrual pain, lupus, and Raynaud syndrome, cardiovascular diseases, Alzheimer’s disease, and cancer. Oils extracted from fish such as tuna, salmon herring, shellfish, and sardines are rich sources of DHA.

Market Dynamics
The market is driven by factors such as Growing consumer awareness among people regarding the health benefits of omega-3 fatty acids, changing lifestyle and eating habits cause nutritional deficiencies, which increase the demand of fortified foods and dietary supplements to meet the daily nutritional requirement, increasing use of fish oil, krill oil, and algae oil in pharmaceutical products due to high medicinal properties present in oil such as DHA oil is propelling the growth of the market. Few restraints for this market are lack of knowledge among people about the daily dose or recommend intake of nutrients through these oils causes an excess in intake, which can lead to side effects and high costs of manufacturing these products and availability of alternative products hinders market growth. Also, Growing trend of adopting naturally products, rich in nutrients, vitamin, and minerals scope in the market. Increase in focus on research & development for finding alternative vegetarian and vegan sources of omega 3 fatty acids is a key opportunity propelling the growth of the market.

On the basis of types, the market has been divided into industrial fish oil, Algae oil, krill oil and other. The industrial grade segment dominates the market during the forecast period. Fish oil is used for several applications such as dietary supplement, prescription medicines for coronary heart diseases, and stroke, which are prescribed for weight loss, skin health, eye health, and bone health. However, excess use of fish oil can increase health risks and cause side-effects such as high blood sugar and excessive bleeding. The algae oil is expected to expand at CAGR 13.3% as they are odorless and has several health benefits. 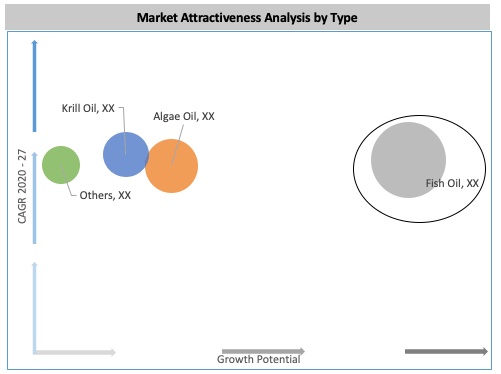 Based on applications, the DHA oil market has been segmented into infants’ formulae, dietary supplements, fortified food & beverages, pharmaceutical, and others. In terms of revenue, dietary supplements is expected to hold a significant market of 34.8% in 2019, as they are widely adopted by people to increase their metabolism and improve health. New mothers are seeking for DHA supplements for their babies to provide essential nutrients and to boost their brain development. Increasing application of DHA oil in medicines for the treatment of several diseases is driving the sales of DHA source products in pharmaceuticals. 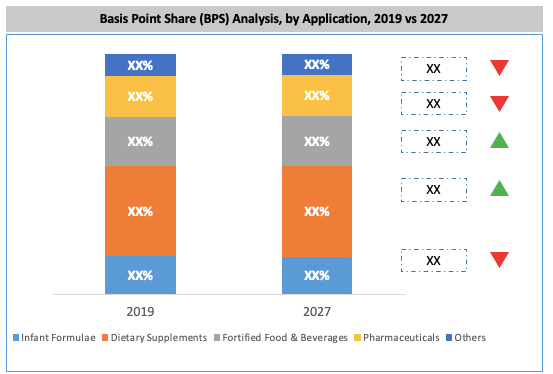 Definitions
By Type
Fish Oil: Fish oil is a type of fat or oil, extracted from the fish tissue, which contains omega 3 fatty acids such as DHA and EPA, which are present in high quantities in fish such as mackerel, herring, salmon, anchovies, tuna, and cod and seal and whale blubber. Fish oil is used for several applications such as dietary supplement, prescription medicines for coronary heart diseases, and stroke, which are prescribed for weight loss, skin health, eye health, and bone health. However, excess use of fish oil can increase health risks and cause side-effects such as high blood sugar and excessive bleeding.

Algae Oil: Algae oil is obtained from marine algae (microalgae), which produces more oil as compared to land-based algae. Algae oil is a source of omega-3 fatty acids including DHA and EPA. This oil can be used for cooking, as it contains lesser quantity of unsaturated fats and higher amounts of good fats than ordinary cooking oil such as olive oil and coconut oil. Algae oil looks and feels similar to canola, vegetable, and other cooking oils. It is and odorless and has several health benefits. Algae oil is known as algal biofuel/algae fuel and is an alternative to liquid fossil fuel.

Krill Oil: Krill oil is obtained from a small crustacean of the Euphausiacea order, similar to shrimp, which are found in oceans. Krill are usually eaten by Baleen whales, mantas, and whale sharks. Krill oil has medicinal properties and can be used for treating dry eyes, high cholesterol, triglycerides, osteoarthritis, and premenstrual syndrome (PMS). 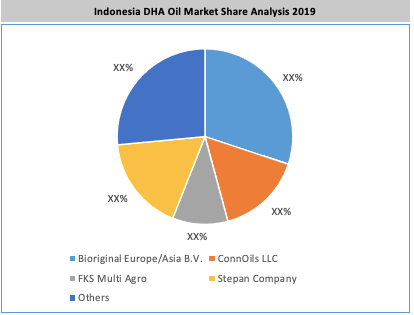 Yes, the report covers product specific information such as Indonesia distributor, types of products, and etc.

According to this Growth Market Reports report, the market from Indonesia DHA oil is likely to register a CAGR of 13.4% during forecast period 2020-2027, with an anticipated to reach USD 133.3 million by the end of the 2027.

Company Market Share (in % for base year 2019) for DHA oil market is available in final report.

5. What are the factors driving the growth of Indonesia DHA oil Market?

Rising consumer awareness among people regarding the health benefits of omega-3 fatty acids increase in nutrient deficiencies in human body is expected to boost the market.

6. What are the key Applications driving the market growth?

The market is expected to remain unhampered between 2019 and 2020 owing to the continuous supply raw material and rising awareness among people for immunity in the human body.

9. Which is the base year calculated in the Indonesia DHA oil market report and what is analysis period?