The global antiseptics and disinfectants market were valued at US$ 9.4 Billion in 2019 and is projected to reach US$ 17.8 Billion by 2027 expanding at a CAGR of 8.2% during the forecast period, 2020-2027. Antiseptics and disinfectants products are primarily used for eliminating viruses, bacteria, fungi, and other disease-causing germs on the human body and non-living objects. According to the National Healthcare Safety Network (NHSN) Surgical Site Infection Surveillance in 2018, 11% of all deaths in intensive care units were reported to be associated with surgical site infections. This, in turn, has increased the demand for antiseptics and disinfectants in hospitals and clinics.

Prevalence of hospital-acquired infections, rising consumer health awareness & healthcare expenditure, technological improvements in manufacturing of antiseptics & disinfectants are considered as the primarily drivers the market for higher sales. However, stringent regulations related to the usage of antiseptics & disinfectants and negative perception about the use of chemical disinfectants are the major barriers for market growth. Though respective country government campaigns & awareness programs regarding home and personal hygiene are projected to create growth opportunities for market players.

On the basis of product, the global antiseptics and disinfectants market is bifurcated into antiseptics and disinfectants. The antiseptics segment is estimated to hold a major market share in the global market owing to growing health & skin concern among consumers. Increase in prevalence of the different pandemics such as SARS, swine flu, ZIKA, and coronavirus over the last few years is increasing the demand for such antiseptics across the globe. The global disinfectants market is anticipated to grow highest during the forecast owing to growing consumer focus for home cleaning & hygiene products. Online sales channels are expected to see a robust demand for disinfectants sales across the globe owing to high consumer inclination towards online sales. 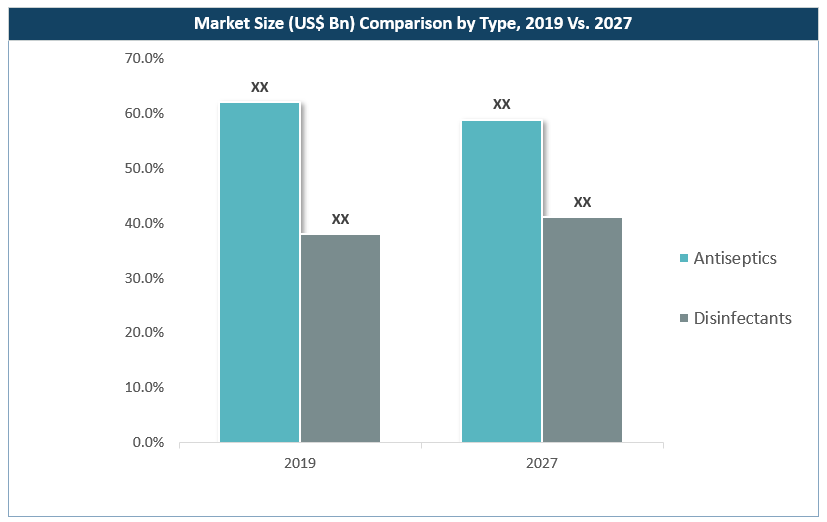 Enzymatic Cleaners - Enzymatic cleaners produce enzymes that help break down neutral pH soil particles (usually pH 6-8). Enzymatic cleaners have different types of enzymes, such as proteases, amylases, and lipases that break down different types of soil particles. All enzyme types belong to the class of compounds known as proteins. Proteins and enzymes are complex molecules composed of amino acids bound together by peptide bonds.

Surface Disinfectants - Surface disinfectants are chemical products often use for killing germs on surfaces. It is known as a method to inactivate pathogens on inanimate surfaces. 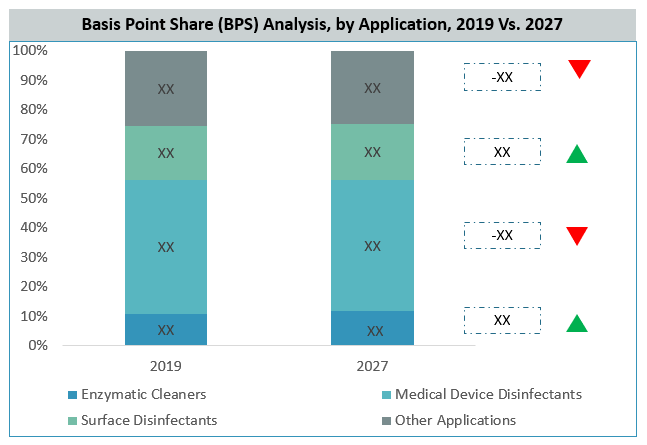 In terms of regions, the market has been fragmented into North America, Europe, Asia Pacific, Latin America, and Middle East & Africa. North America antiseptics and disinfectant market holds the highest value share in 2019 which was accounted for more than one third of the global market. The demand for antiseptics and disinfectants is expected to be highest in Asia Pacific due to high consumer base along with the growing health & hygiene practices and intense market competition in the region which ultimately benefits the consumers. The Asia Pacific market is expected to expand at over 11.0% CAGR during the forecast.

The market in Asia Pacific area is estimated to expand at exhibit a significant CAGR during the forecast period due to increasing in prevalence of hospital-acquired infections and diseases such as food poisoning, cholera, and typhoid fever in the region. Moreover, global players are taking efforts to penetrate untapped countries in this region.

Key players in the market include Bio-Cide International, Inc., SC Johnson Professional, P&G, Reckitt Benckiser Group plc, The Clorox Company, 3M and others. These companies are considered as key manufacturers of antiseptics and disinfectants based on their revenue, research development (R&D) activities, regional presence, and supply chain management system.

The players are adopting key strategies such as acquisition, and geographical expansion where potential opportunity for the antiseptics and disinfectants extraction is added in the company’s capacity. For Instance -

2. Does this report cover pricing analysis of the products?

Yes, the report provides pricing analysis from 2017-2027 on weighted average for each product.

3. How big will be the antiseptics and disinfectants Market in 2027?

According to this Growth Market Reports report, the market from antiseptics and disinfectants is likely to register a CAGR of 8.2% during forecast period 2020-2027, with an anticipated valuation of US$ 17.8 billion by the end of the 2027.

In addition to market size (in US$ Million), Market Volume (in Million Kgs), and Company Market Share (in % for base year 2019), other data such as pricing analysis for year 2017 to 2027 (estimated pricing analysis) is provided, global patent analysis is provided, short term and long term outlook for antiseptics and disinfectants market is available in final report.

5. What are the factors driving the growth of antiseptics and disinfectants Market?

Growth in Prevalence of Hospital-acquired Infections, and Increase in prevalence of the different pandemics such as SARS, swine flu, ZIKA, and coronavirus over the last few years has increased the usage of antiseptics and disinfectants across the globe. Moreover, rising healthcare expenditure of consumers also push the antiseptics and disinfectants market for further growth.

8. What is the key chemical type driving the market growth?

Quaternary Ammonium Compounds, and Alcohols & Aldehyde Products are considered as the primary driver for the global antiseptics and disinfectants market.

9. Which is the base year calculated in the global antiseptics and disinfectants market report and what is analysis period?