The global in-display fingerprint sensor market was valued at USD 863.8 Million in 2019 and is projected to reach USD 4,465.6 Million by 2027, expanding at a CAGR of 23.5% during the forecast period. In terms of volume global in-display fingerprint sensor was valued at 2,05,518 thousand units in 2019 and it is expanding at CAGR of 28.5% during the forecast timeline. Fingerprint recognition is one of the most common biometric techniques in today's market. Recent smartphones, for example, typically take fingerprint sensors for biometric identification methods. Several methods are employed for detecting fingerprints, such as optical methods, capacitive methods, and ultrasonic methods. The capacitive method is the optimal solution for smartphone and IoT applications due to the low power consumption and compact size of capacitive fingerprint sensors, as they are low-cost and have a small in size. However, most of the previous sensor suffered from a problem of unsteady sensitivity under variable finger conditions (dry finger and wet finger) and a noisy atmosphere that significantly degrades the scanner. Several ideas were proposed to improve image quality by using a local threshold level, adding compensation capacitors, using the suppression of voltage drop, or applying an efficient isolation system.

The demand for In-Display Fingerprint Sensors is rising as they are increasing use of in-display fingerprint sensors in smartphones and tablet PCs. Rising disposable income of people has increased the ability to afford expensive sensors- based smartphones. Conversely, High cost of a few display fingerprint sensors and availability of alternatives are expected to restrain the growth of market. Growth in application of capacitive sensors in mobile phones and rising government initiatives toward local manufacturing are creating lucrative opportunities in the market. 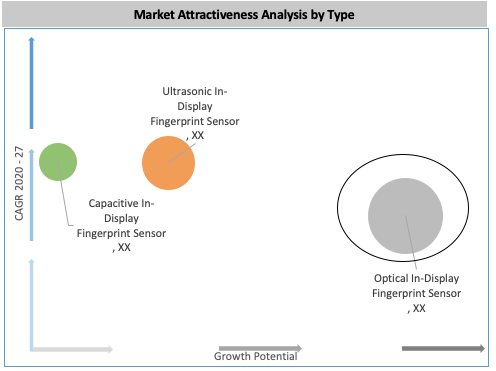 In terms of applications, the smartphone segment is expected to grow at a considerable pace, as manufacturers are focusing on reducing the bezels around the screen. Fingerprint sensors are used to unlock smartphones and provide access to confidential personal information. Most smartphone manufacturers are integrating these sensors in their displays, as the technology is very distinct from the conventional sensor. 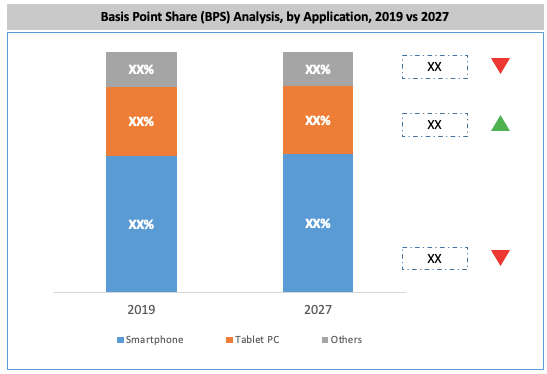 By Product Type
Definitions
Optical Fingerprint Sensors
Optical fingerprint sensors are used to compare and capture fingerprint. Optical fingerprint sensors depend on capturing a picture, an optical image, and the use of algorithms to identify specific patterns on the surface, such as specific lines, by examining the darkest and brightest areas of the image. Unlike smartphone cameras, these sensors can have a higher resolution and finite resolution, which helps provide better information to the sensor enabling it to scan the finger and improve protection. Moreover, these sensors record a much higher contrast image than a standard camera. A big downside with optical scanners is that they are not difficult to fool. Since technology only captures a 2D image, prosthetics and even other images of high quality can be used to trick this particular design. This type of scanner is not safe or trustworthy, for protecting sensitive information; therefore, it has been phased.

Capacitive Fingerprint Sensors
Capacitive fingerprint sensors record fingerprint images by analyzing the difference in capacitance through fingerprint sensors, valleys, and ridges. A capacitive fingerprint sensor comprises a capacitive pixel array, controller, and read circuit. The capacitive pixel array interfaces and captures the fingerprint data and determines the sensor resolution by setting the pitch and cell size. The read circuit uses one of the following methods to transform the capacitance: capacitance-to- voltage, capacitance-to-pulse length, or capacitance-to-frequency. Many read circuits are fitted with an analog-to-digital converter (ADC) to convert the sensing values to digital data to enable the controller to perform post-processing on the data. The capacitors enable the electrical charge to be stored by connecting to conductive plates on the surface of the scanner, which allows the fingerprint details to be tracked. The result of these sensors is non-replicable with any image and difficult to replicate using prosthetics, as different materials record different changes in charge at the capacitor. Thus, such scanners provide superior safety, are fast, and difficult to be fooled.

On the basis of regions, the market in Asia Pacific is growing at a high pace and is projected to continue to do so during the forecast period. Market growth is mainly driven by the rapidly growing number of smartphone users across the country. In 2018, the total penetration of smartphones in Asia Pacific was the largest. Moreover, Internet penetration across the entire population is increasing for smartphones. High demand for smartphones is anticipated to fuel the growth of in-display fingerprint sensors worldwide.

Asia Pacific, is followed by North America, in terms of market share. The market in the region is estimated to expand at a considerable CAGR due to the high demand for smartphone with latest technology. This is expected to drive the growth of the in-display fingerprint sensors market in the region. 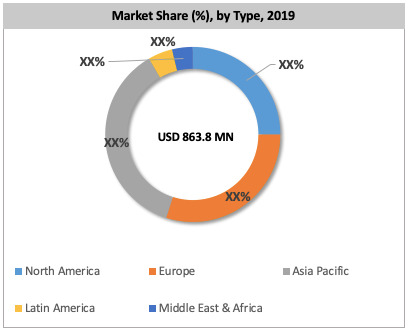 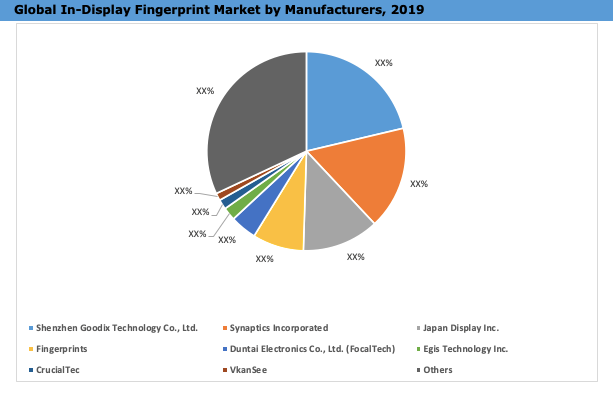 3. How big will be the In-Display Fingerprint Sensor Market in 2027?

According to this Growth Market Reports report, the market from in-display fingerprint sensor is likely to register a CAGR of approximate 23.5% during forecast period 2020-2027, with an anticipated to reach around USD 4,465.6 million by the end of the 2027.

Company Market Share (in % for base year 2019) for in-display fingerprint sensor market is available in final report.

5. What are the factors driving the growth of in-display fingerprint sensor market?

Increasing use of in-display fingerprint sensors in smartphones and tablet PCs and rising disposable income of people has increased the ability to afford expensive sensors- based smartphones is propelling the growth of the market.

6. What are the key Application driving the market growth?

Smartphone, Tablet PC, and others are the key application which driving the growth of the market.

The market is expected to witness downtrend during 2019-2020 owing to the negative impact of COVID-19 pandemic on the global In-Display Fingerprint Sensor market.

9. Which is the base year calculated in the global in-display fingerprint sensor market report and what is analysis period?