The global heat-not-burn (HNB) tobacco market was valued at USD 8,148.4 Million in 2019 and is projected to reach USD 51,741.2 Million by 2027, expanding at a CAGR of 27.2% during the forecast period. The demand for heat-not-burn (HNB) tobacco is growing due to increasing smoking population. The COVID 19 outbreak has slowed down production and sales activities and reduced the demand for HNB tobacco due to health concerns during the pandemic. COVID-19 has hampered the sales of HNB across the many sales channels such as supermarkets and tobacco stores, thus impeding the HNB tobacco market.

HNB tobacco products are electronic devices that use electric heating elements to heat tobacco to produce aerosols containing nicotine and other chemicals, which are inhaled by users through the mouth. HNB tobacco products also contain non-tobacco additives, which are often flavored. The HNB products are similar to conventional cigarettes. These products use specially designed devices similar to cigarettes for heating the tobacco inside them. Commercially available HNB systems such as Glo or IQOS include a charger, a holder, tobacco sticks, plugs, and capsules. Tobacco sticks are heated with an electronically controlled heating element that is inserted into the holder. Other products, including iFuse or Ploom Tech, produce vapor from a non-tobacco source and pass it through a tobacco plug to absorb flavor and nicotine. HNB tobacco products fall in a niche between combustible tobacco cigarettes and electronic cigarettes that vaporize nicotine suspended in humectants. 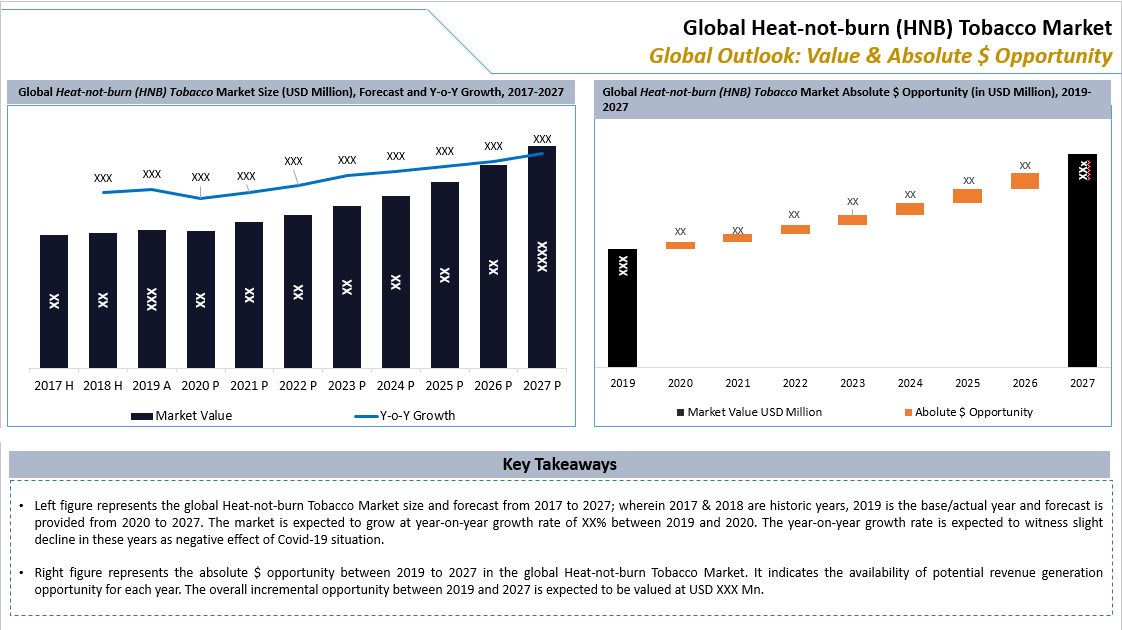 Market Dynamics
According to the US Food and Drug Administration (FDA) and the World Health Organization (WHO), smoking population has been increasing rapidly in the recent years and diseases related to lungs such as cancer is growing rapidly, especially people who ages between 30 and 45. HNB tobacco products release lower levels of monoxide, carbon, tar, and other chemicals causing cancer than regular cigarettes, and hence they are preferred over conventional tobacco products. Moreover, cost-effectiveness of these products is fueling its demand across different geographical regions. HNB tobacco devices and capsules are relatively more economical than conventional tobacco products due to increasing taxes on traditional cigarettes that have raised their prices considerably.

According to a recent study conducted by FDA and WHO researchers, it has been proven that the consumption of tobacco through HNB tobacco products has similar harmful effects as a traditional tobacco product such as cigarettes. Additionally, a study conducted by the US researchers showed that smoke from HNB tobacco products has same nicotine levels as conventional cigarette smoke. Nicotine, the highly addictive substance found in tobacco, is unsafe for the youth and can harm infant and adolescent brain development. Some research has proved that it is a misperception that HNB is not as harmful as traditional cigarettes. 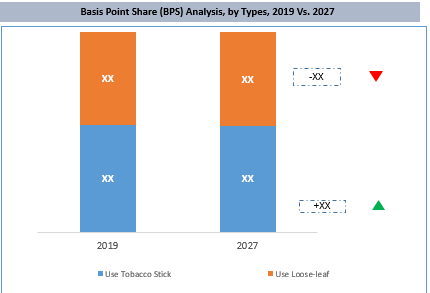 By Sales Channels
Based on sales channels, the market is segmented into supermarket, tobacco store, and online. Revenue generation from the tobacco store segment is expected to register high incremental opportunity during the forecast period. The HNB tobacco products are one of the latest products for smokers and their demand is expected to rise significantly during forecast period. 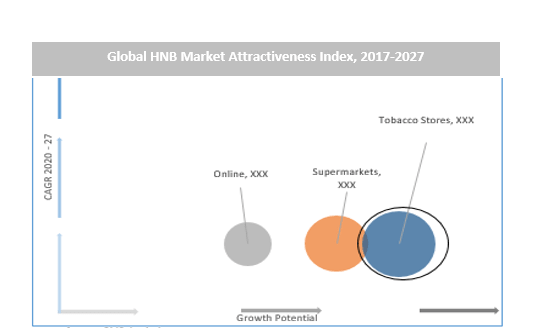 In terms of regions, the global heat-non-burn (HNB) tobacco products market is classified as North America, Europe, Latin America, Asia Pacific, and Middle East & Africa. The market in Asia Pacific is projected to expand at a significant CAGR during the forecast period. Japan is expected to be an attractive country for the global HNB tobacco product market. The adoption of HNB tobacco product in this country is higher than in other countries due to dense presence of smokers. 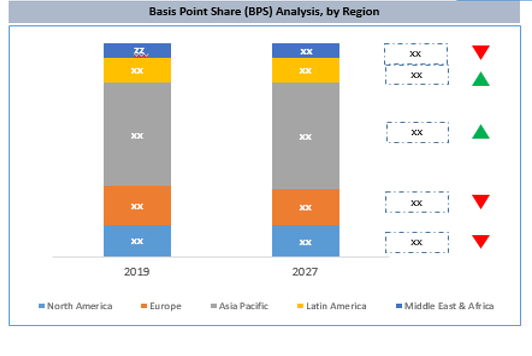 2. Does this report also cover types of the HNB tobacco products?

Yes, the report covers products of global HNB tobacco products such as Use tobacco stick, and use loose-leaf.

3. How big will be the global HNB tobacco products market in 2027?

According to this Growth Market Reports report, the market from the global HNB tobacco products market is likely to register a CAGR of 27.2% during forecast period 2020-2027, with an anticipated valuation of USD 51,741.2 million by the end of the 2027.

In addition to market size (in USD Million) and Volume (units) Company Market Share (in % for base year 2019), other data such Macro-economic factors, COVID-19 Impact on the global HNB tobacco products market is available in final report.

5. What are the factors driving the growth of the global heat-not-burn (HNB) tobacco Product market?

The global HNB tobacco products Market is anticipated to grow slowly during forecast period due to decline in demand for tobacco products owing to growing infections and diseases. Moreover, rising awareness about adverse effects of tobacco on health is likely to slow down the growth of the heat-not-burn tobacco market.

6. What are the key Sales Channels driving the market growth?

Supermarket, and tobacco store are the key Sales Channel driving the market growth.

The market is expected to witness sluggish growth with decline in terms of demand during 2019-2020 owing to the negative impact of COVID-19 pandemic on the global HNB tobacco products market.

9. Which is the base year calculated in the global heat-not-burn (HNB) tobacco products Market report and what is analysis period?