The Global Small Modular Reactors Market was valued at USD 4.6 Billion in 2019 and is projected to reach around USD 325.2 Billion by 2035 in terms of conservative scenario expanding at a CAGR of 30.6% during the period, 2019 and 2035. The market is expected to grow owing to increase in population worldwide and with that rising demand for power and energy. The demand for SMR is growing rapidly in accordance with the growth in the demand for electricity across the globe. Rising population and disposable income of people across the globe are driving the need for electricity, and hence the demand for small modular Reactors. 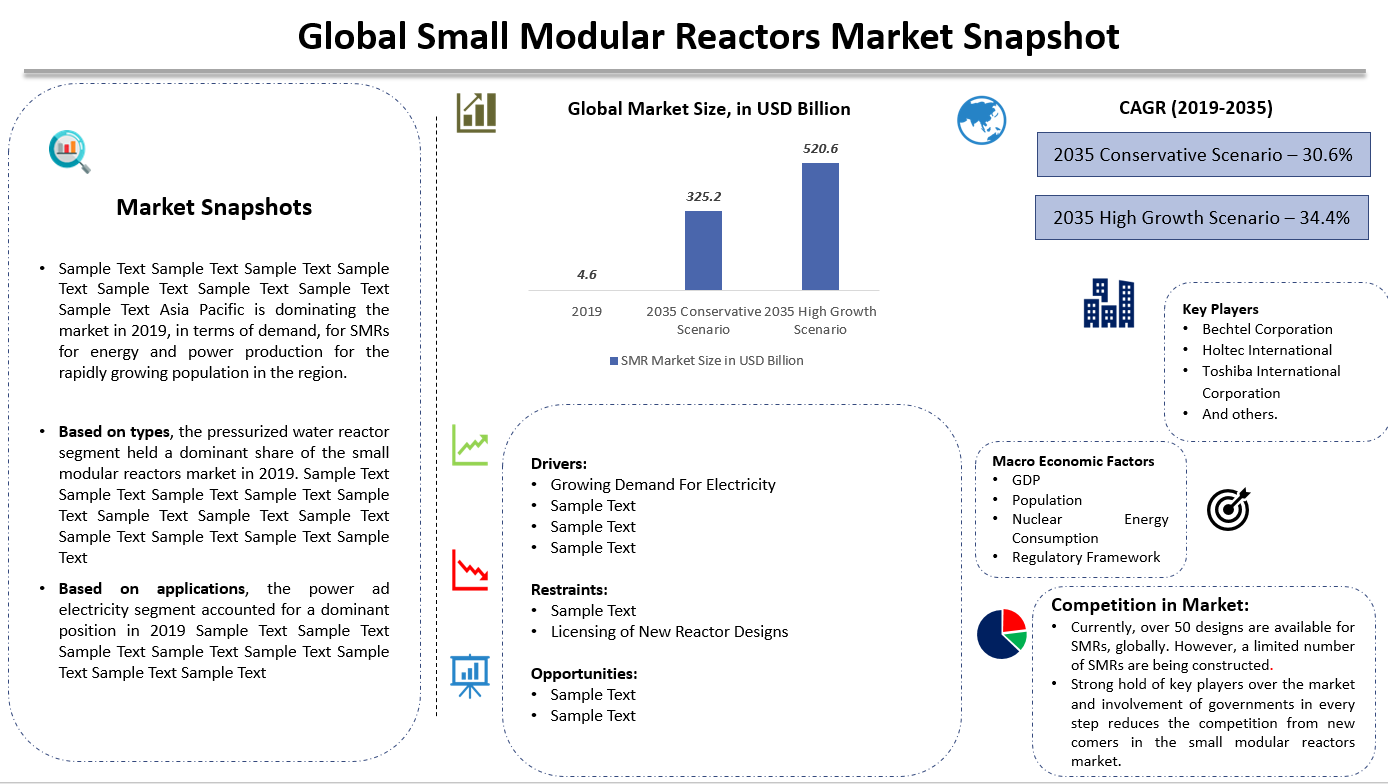 Additionally, the small modular reactors market is driven by increasing demand from the shipping segment and oil & gas processing units, and other types of processing units where heat and energy are required on a large scale. The advantages of small modular reactors and vendor claims as per the current designing models is leading to rising popularity of the SMRs over large reactors. Moreover, the large reactors have their substantial position in the areas of huge energy production requirement but the factors such as less emission, less need of raw material, and modular design are helping SMRs to gain popularity.

Market Dynamics
The boom in electricity consumption across residential and industrial sectors is boosting the focus of governments to use sustainable power generation methods over conventional ones to reduce their carbon footprint. Additionally, rising electrification of connected devices, transport, and other essential services is fueling the demand for more electricity, which in turn, is boosting the demand for small modular reactors due to their less carbon emission.

Rising inclination toward generating clean energy is anticipated to create lucrative opportunities in the market. Moreover, Governments from around the globe are aware about crumpling balance of the environment and are taking strong actions to save the environment, which includes the implementation of stringent rules against harmful emission. These rules are driving new investors toward small modular reactors. Besides, the capital required to set up a small modular reactor plant is less than that required for conventional reactor plants. Small modular reactors require less construction, which reduces the need for investments. Furthermore, modular design of SMRs makes is easier to transport and install on location. These factors reduce the final cost of the reactor installation on location. Although Small modular reactors are ideal for remote locations and their installation costs are lower than those required for conventional nuclear reactors. Economical and business perspectives to match up with the cost invested. Production has to be large scale. If the demand for products produced by end use industries is not enough, it can turn into a huge loss. This is reducing investments in small modular reactor plants, which in turn, is hampering the market.

By Type Segment
On the basis of types, the small modular reactors market is segmented into molten salt reactors (MSR), pressurized water reactor (PWR), sodium fast reactor (SFR), high temperature reactor (HTR), fast neutron reactor (FNR), and others. The pressurized water reactor segment accounted for a major share of the market in 2019, as it used for generating electricity and propel naval vessels and nuclear submarines. Among the second generation rectors, pressurized water reactor are consider to be the cleanest reactor and they provide multiple barrier of safety. These reactors are consider ideal for naval ships, as they generate high power (high more to their mass) by using high pressure. Hence, the demand of pressurized water reactor is high around the world. The molten salt reactors generator low waste and are highly efficient at producing electricity, which in turn, are projected to fuel the segment. Moreover, molten salt reactors have low operating pressures, as they reduce the loss of coolants and risk of large break thereby, enhancing safety of the reactor. In terms of applications, the market is segregated into power & energy, oil & gas, shipping, and others.

By Application Segment
In terms of applications, Small Modular Reactors Market is segmented into power and energy, oil and gas, shipping and others. The power ad electricity segment accounted for a highest market share in 2019. Owing to the growing population and with that the rise in demand for power and electricity. The oil & gas segment is likely to expand at a significant CAGR of during the forecast period. As the natural oils and gases are used for many of its applications. The water desalination from the others segment is projected to hold second position in terms of growth during forecast period. 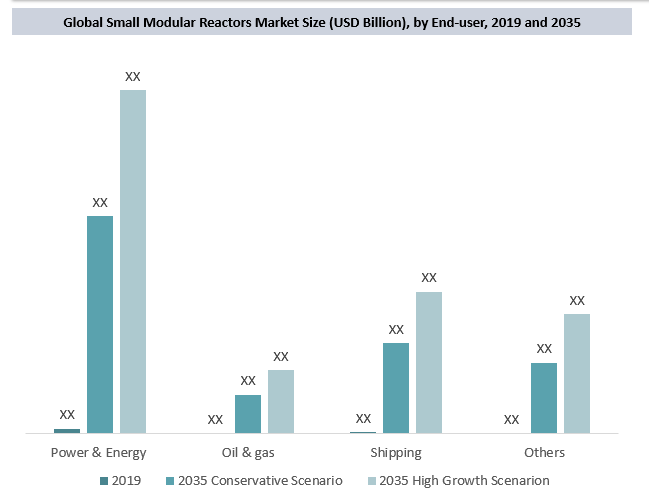 Based on regions, the global Small Modular Reactors Market has been divided into North America, Europe, Asia Pacific, Middle East & Africa, and Latin America. : Asia Pacific has the most number of end-users of SMRs due to the high demand for electricity from the oil & gas industry and the presence a growing shipping industry in this region. Russia have one floating nuclear power station to supply electricity to the remote areas in the country. The plant is expected to produce enough energy for 100000+ residents in remote locations of Russia. Europe and North America region are expected to show a significant growth as US and Canada are investing more in sustainable energy sources. 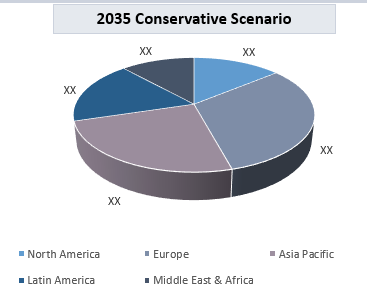 2. Does this report also cover types of small modular reactors?

3. How big will be the Small Modular Reactors Market in 2027?

According to this Growth Market Reports report, the market from Small Modular Reactors is likely to register a CAGR of over 30% during period 2019 and 2035, with an anticipated valuation of USD 325.2 Billion in terms of conservative scenario and USD 520.6 billion in terms of high growth scenario by the end of the 2035.

5. What are the factors driving the growth of Small Modular Reactors market?

6. What are the key applications covered in report?

Power and energy, oil and gas, shipping and others are the key applications driving the market growth.

The market is expected to witness moderate impact of COVID-19 pandemic on the small modular reactors.

9. Which is the base year calculated in the global Small Modular Reactors Market report and what is analysis period?

The base year considered for the global Small Modular Reactors market report is 2019. The forecast analysis is provided for year 2035 with two scenarios – High growth and conservative scenario.