The global electric vehicle power inverter market was valued at USD 17,110 Million in 2019 and is projected to reach USD 29,550 Million by 2027, expanding at a CAGR over 6.4% during the forecast period. A power inverter is an electrical device that converts electricity from a DC source to AC to be used to drive a device or appliance. Considering the same function in an electric vehicle, a power inverter is one of the key components to converts battery DC power into AC power for an electric motor. To manage EVs and hybrids electric drive systems, power inverters are used. The power inverter supplies current to the battery for recharging purposes during regenerative braking. It also provides electric power to the motor for vehicle momentum. Adversely, the weight and size of the power inverter in a vehicle have a direct impact on driving range and road performance, and consistency of the vehicle. In order to increase automotive inverter's power efficiency and reduce size and weight, the inverter manufacturers in the vehicle sector have upgraded inverter abilities to handle energy from both the battery and motor end. 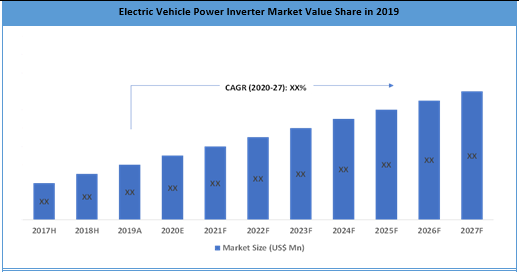 Market Dynamics
Major Shift from Conventional Engine to Electric & Hybrid Engine
The key automakers are progressively moving their focus from conventional engine vehicles to electric & hybrid vehicles, with mounting stringent emission standards across the globe. Also, to motivate the sale growth of electric vehicles among the customers, regional governments in many countries have initiated financial benefits like incentives, tax benefits, and also other non-financial benefits such as carpool lane access, and ease in new car registration, better accessibility of charging infrastructure, and active involvement by automotive OEMs among others. Moreover, the increasing installation of charging station facilities in key regions such as North America, Europe, Asia-Pacific, by the major electric vehicle manufacturer has sustained the growing electric vehicle sales.

In addition, the growing concerns of regulatory bodies toward a green environment have increased the demand for zero-emission vehicles. Major economies such as the US, Canada, Germany, Japan, South Korea, and the UK are enthusiastically encouraging the use of electric vehicles to minimize carbon emissions, which has also contributed to the growth of electric vehicle sales.

On the basis of applications, the market has been divided into households, commercials, and others. The commercial application segment is showing a significant growth rate during the forecasted period. The driving factors associated with are increasing acceptance of electric public transport, predominantly in China, India, South East Asia, have supported the growth of the electric commercial segment. Various developed and developing countries are influenced to switch their current fuel bus fleet with electric battery-powered buses to adhere to their regional/legislative norms. The growing implementation of the green public transport fleet will drive the growth of electric commercial vehicles. Furthermore, the continuously rising e-commerce market, an increase in logistics activities, and shared mobility trends in metro cities will contribute to the electric commercial vehicles market growth during the forecast period. 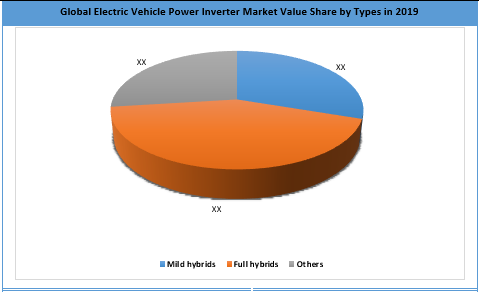 On the basis of regions, the global electric vehicle power inverter market has been segmented into North America, Europe, Asia Pacific, Latin America, and Middle East & Africa (MEA). North America is a key region of the market and accounted for a market share of over 17% in 2019. The presence of major market players and development activities in the region is expected to upsurge the market growth in the country during the forecast period. For instance, Denso has started producing a next-generation inverter for the US original equipment manufacturers. They are also expanding new technology with other key customers in the North American market. It is part of Denso's USD 1 Bn investment to make its Maryville, Tennessee, location a manufacturing hub in North America for electrification, connectivity, and advanced safety products. 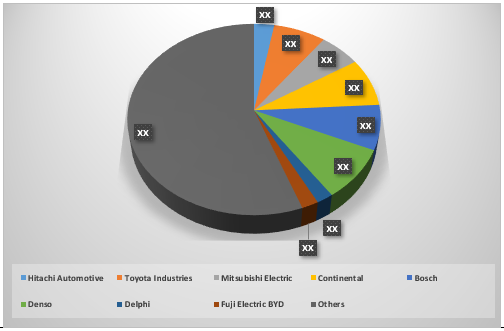 Yes, the technology landscape is available on request.

3. Does the report give definition for the types of electric vehicle power inverter?

Yes, the report gives the brief introduction of the types of electric vehicle power inverter.

4. How big will be the Electric Vehicle Power Inverter Market in 2027?

According to this Growth Market Reports report, the market from Electric Vehicle Power Inverter is likely to register a CAGR over 6.2% during forecast period 2020-2027, with an anticipated valuation of USD 29,550 million by the end of the 2027.

5. What additional data analysis is available in report?

In addition to market size (in USD Million) and Company Market Share (in % for base year 2019), other data such as technology landscape, Regulatory landscape, and competitive landscape.

6. What are the factors driving the growth of Electric Vehicle Power Inverter market?

Major Shift from Conventional Engine to Electric & Hybrid Engine and major concerns my regulatory bodies towards green environment are expected to drive the market growth during forecast period.

COVID-19 hampered the automotive industry. This, in turn, is restraining the electric vehicle power inverter market.

9. Which is the base year calculated in the global Electric Vehicle Power Inverter market report and what is analysis period?