The global coal to liquid market was valued at USD 3,870.9 Million in 2019 and is projected to reach USD 4,747.0 Million by 2027, expanding at a CAGR of 2.6% during the forecast period. Coal is a vital fuel utilized globally to generate electricity, while petroleum fuels are commonly utilized in vehicles. Moreover, coal and petroleum fuels majorly possess carbon (carbon-carbon bond (C-C)) hydrocarbons), which makes the conversion of coal to liquid fuel more feasible. The production of liquid fuel from coal is also known as coal-to-liquid (CTL) technology or coal liquefaction, either by direct or indirect liquefaction. In this procedure, coal is dissolved in a solvent at high temperature and pressure, followed by hydrogenation to produce a high-grade, clean fuel suitable for use in transport. Moreover, the obtained liquid fuel tends to be ultra-clean, sulfur-free, low in particulates, causes low CO2, oxides, and nitrogen emissions through Carbon Capture and Storage (CCS).

Market Dynamics
Abundant availability of coal, declining levels of petroleum reservoirs, and increased awareness about the technical expertise related to the conversion process among industrialists, and growth of transportation sector in developing nations, such as India and China. As synthetic fuels obtained from the conversion of coal are cleaner (eco-friendly) than those extracted from natural reservoirs, the demand for coal liquefaction has increased, owing to wide support from regulatory authorities worldwide.

Based on application, the market is segmented into biofuels, power generation, chemicals, and wax. The biofuels segment is projected to hold a major share of the market during the forecast period as there is presence of various supporting regulatory policies and tax incentives across the world which, in turn, increases the demand for biofuel.

Definitions
By Application
Biofuel
Biofuel, any fuel that is derived from biomass—that is, plant or algae material or animal waste. Since such feedstock material can be replenished readily, biofuel is considered to be a source of renewable energy, unlike fossil fuels such as petroleum, coal, and natural gas.

Power Generation
Power generation is the process of generating electric power from sources of primary energy. For utilities in the electric power industry, it is the stage prior to its delivery to end users or its storage. A characteristic of electricity is that it is not freely available in nature in large amounts, so it must be "produced" (that is, transforming other forms of energy to electricity). Production is carried out in power stations (also called "power plants"). Electricity is most often generated at a power plant by electromechanical generators, primarily driven by heat engines fueled by combustion or nuclear fission but also by other means such as the kinetic energy of flowing water and wind.

Wax
The others category involved different applications of Coal to Liquids such as football, rugby ball, Soccer Ball, and others. This helps to inflate the things with suitable pressures and maintain the desired shapes, size, and sturdiness.

In terms of regions, the market is fragmented into North America, Europe, Asia Pacific, Latin America, and Middle East & Africa. APAC is a promising region for the market. The region constituted a significant market share of the market in 2019. The market in the region is projected to expand at a CAGR of 4.5% during the forecast period as there is an increase in disposable income, rise in government initiatives are some of the factors expected to boost the market growth in the region. 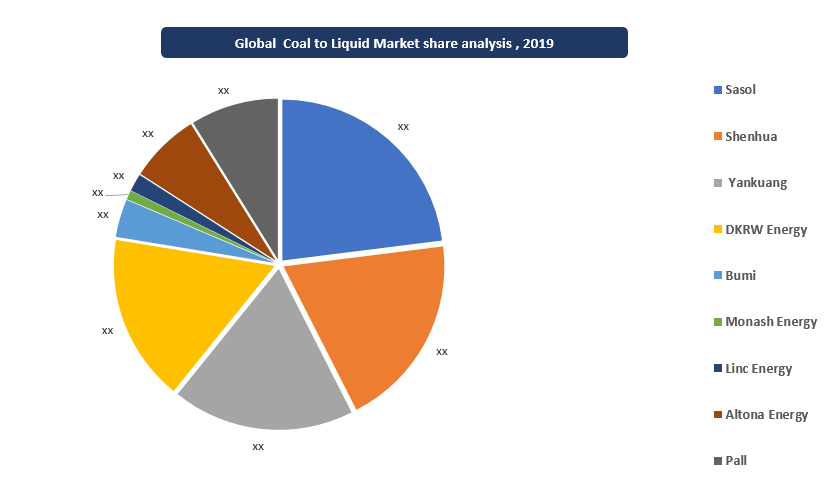 Yes, the report covers macroeconomics factors including GDP, population, disposable income, and others.

According to this Growth Market Reports report, the market from Coal to Liquid is likely to register a CAGR of 2.6% during forecast period 2020-2027, with an anticipated valuation of US$ 4,747.0 million by the end of the 2027.

In addition to market size (in US$ Million) and Company Market Share (in % for base year 2019), other data such as Pricing analysis for year 2017 to 2027 (estimated pricing analysis) is provided, market volume (2017 to 2027) for Coal to Liquid market is available in final report.

5. What are the factors driving the growth of Coal to Liquid Market?

Abundant availability of coal, deteriorating levels of petroleum reservoirs, increased awareness about the technical expertise related to the conversion process among industrialists, and growth of transportation sector are expected to drive the market growth during forecast period.

6. What are the key application driving the market growth?

Biofuels are the key end-user that are driving the Coal to Liquid Market.

9. Which is the base year calculated in the global Coal to Liquid Market report and what is analysis period?