The global aircraft insulation materials market was valued at USD 18,565.8 Million in 2019 and is projected to reach USD 33,570.3 Million by 2027, expanding at a CAGR of 7.8% during the forecast period. The demand for lightweight aircraft in the military and commercial sector is growing, which, in turn, is boosting the usage of lightweight insulators. Many manufacturers in the aircraft insulation segment are investing heavily in research activities to develop and launch cost-effective and lightweight insulators, which can have modular functionalities and high recyclable components. 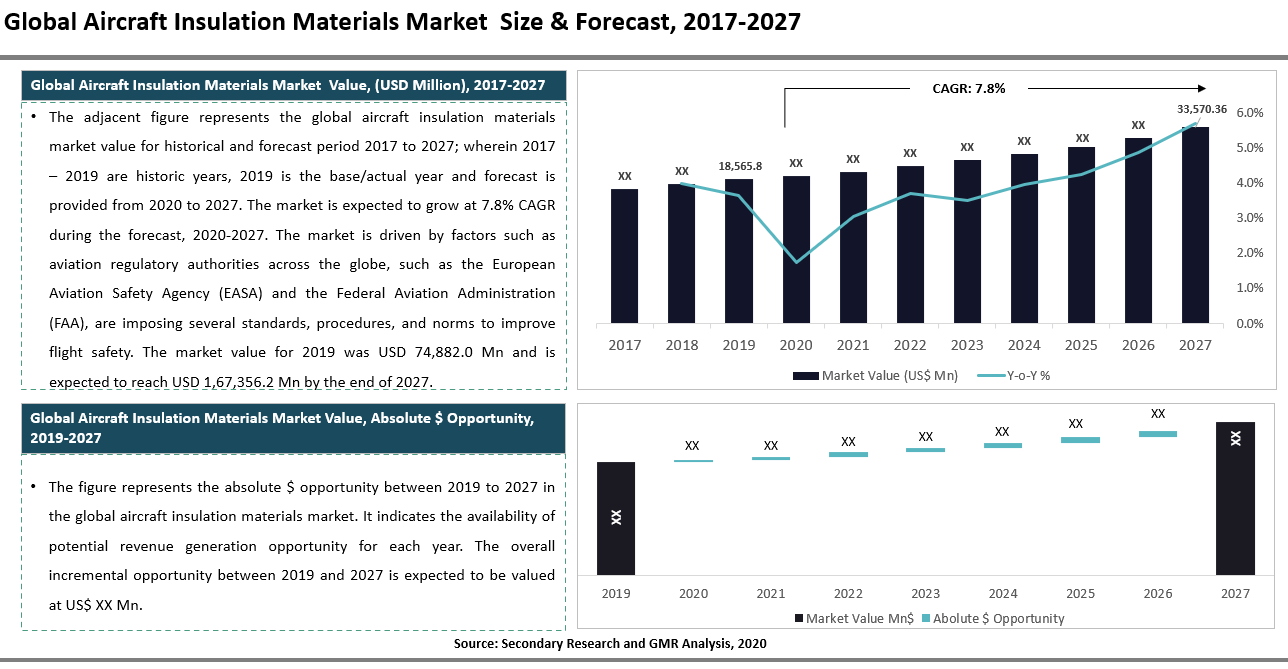 Market Dynamics
The market is driven by factors such as demand for lightweight aircraft in the military and commercial sector, imposing several standards, procedures, and norms to improve flight safety boost the usage of aircraft insulation materials across the world.

Increasing Demand for Cost-Effective and Lightweight Insulators
Many manufacturers in the aircraft insulation segment are investing heavily in research activities to develop and launch cost-effective and lightweight insulators, which can have modular functionalities and high recyclable components.

Strengthen Regulation to Ensure Usage of Safety Materials
Aviation regulatory authorities across the globe, such as the European Aviation Safety Agency (EASA) and the Federal Aviation Administration (FAA), are imposing several standards, procedures, and norms to improve flight safety.

High Labor Cost and Strict Rules in Associated Industry
High labor costs and lack of efficient recycling technology for insulation materials are expected to restraint the growth of the aircraft insulation market. Moreover, EASA, FAA, and other aviation organizations are imposing strict rules on paint manufacturing and chemical companies, which is leading to products having a limited shelf life, thus needing replacement at regular intervals. These factors are estimated to restrain the growth of the market due to their less stability.

Opportunity in Composite Material Category
Increasing demand for the usage of composite materials is expected to create opportunities for the aircraft insulation market players. These materials can help reduce noise and vibration while increasing fire safety. An increase in the number of electric components in aircraft is projected to fuel the growth of the market.

Growing Travel Trend and Rise in Investment to Boost the Industry Further
An increase in the production of aircraft, a surge in air travel, a rise in living standards in developing countries, and growth in the number of low-cost airlines have increased the production of insulation materials.
The rise in investments to make aircraft lightweight for the military and commercial sectors are increasing the demand for aircraft insulation materials.

On the basis of types, the aircraft insulation materials market has been segmented into thermal, acoustic & vibration, and electric insulation. Thermal insulation plays a vital role in maintaining a comfortable environment while the aircraft is in the air owing to these thermal insulation materials being used significantly in the aircraft. Material segment is expected to grow highest at 9.1% during the forecast as compared to insulation type. Foamed Plastics category holds the highest value share in the materials segment. Based on application, the market is fragmented into military aviation, civil aviation. Civil aviation holds the highest value share 62.0% in 2019 however, military aviation is expected to expand highest 6.3% during the forecast, 2020-2027.

In terms of regions, the market has been segmented into North America, Europe, Asia Pacific, Latin America, and Middle East & Africa. North America is a promising region for the market. It constituted a 45.7% share of the market in 2019. The North America market in the region is projected to expand at a CAGR of 8.1% during the forecast period. Huge spending on defense aircraft and the military is driving the regional market growth. Also, the presence of major industry players such as Triumph Group Inc., Esterline Technologies Corporation, and DuPont, is further propelling the market rise. The Asia Pacific is estimated to witness high growth during the forecasted time. A lot of numbers of aircraft have to be delivered by Boeing in upcoming years in the Asia Pacific region. Mainly the demand is been originated from China, India, and Japan. Other supporting drivers in the region are the opening of assembly plants of Boeing in this region. Moreover, there is growth in investments in new airport development in the Asia Pacific, due to which there are opportunities for aircraft insulation materials adoption.

3. How big will be the aircraft insulation materials Market in 2027?

According to this Growth Market Reports report, the market from aircraft insulation materials is likely to register a CAGR of 7.8% during forecast period 2020-2027, with an anticipated valuation of USD 33,570.3 million by the end of the 2027.

In addition to market size, value (in US$ Million) and volume (‘000 KG), Company Market Share (in % for base year 2019), other data such Macro-economic factors, COVID-19 Impact on the value chain is available in final report.

5. What are the factors driving the growth of aircraft insulation materials market?

The market is expected to witness a decrease of over 2-3% between 2019 and 2020 owing to the adverse impact of COVID-19 pandemic on the aircraft insulation materials market.

8. Which is the base year calculated in the global aircraft insulation materials market report and what is analysis period?

9. Who are the key application driving the market growth?